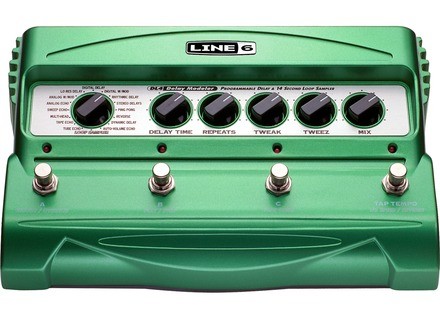 DL4, Delay/Echo/Phrase Sampler for Guitar from Line 6 in the Stompboxes Modeler series.

Buy this productView price information >
View other reviews for this product:
Well I do not m'tends on this topic, we know what's going on ...

The operating principle is very simple, it turns potentiomtres and the sound changes, classical, practical, easy ... Only the rle of potentiomtres exchange for virtually every type of delay and it is easy (especially for the effects we use the least) of not knowing what function each represents. Well, said cell Line 6 provides us with little stickers stuck on the pedals résumé functions of knobs for each effect. This remedies a problem only partially: it is better not to engage in rglages scne on ...
Fortunately, before resorting to the stickers, you can store in memory three prrgls effects and remember a simple press of the corresponding switch. APRS is the problem of settled on only three effects ...

Ok .. The biggest problem of the pedals RSID in the impossibility of using the tap tempo when no effect is engaged. In short, to synchronize delays with the current song you must first activate the effect and only then you can use the switch function ddi tap, making the use of a delay in synchronized middle of a sentence almost impossible, unless the sentence is trsar said ...

It enrages me so much against this gap dbile the note on the use takes again in a serious blow!

Well I'm really boring on the sound quality of my stuff, but this is irrprochable pedals: the delays are all relevant and compltent perfectly to form a homognit PDAL impressive. For my part I use mainly vintage delays or tube tape echo type echo, but all are ultra INTERESTED and totally usable.
Is that a ring-like machines that are supposed mulate? Is-that gives a "big analog sound"? Is it really sounds, as a "vintage"?

I do not know and I do not care: a ring!

I bought and sold a lot of material that does not satisfesait me or that I no longer used, but the srieusement I plan to buy, in addition to the DL4, the Echo Park (which is the m I PDAL Allgemeine version) to put a delay when I use the looper the DL4, or just to have the same sound quality but smaller and more lightweight in some projects ...

Damage to the absence of the afternoon, unforgivable for the operation of tap tempo, but APRS over a year of use on bass, bass and various machines, the sounds I get out of the pedals still impress me .
See the source
Did you find this review helpful?yesno
Cookies help us improve performance, enhance user experience and deliver our services. By using our services, you agree to our use of cookies. Find out more.