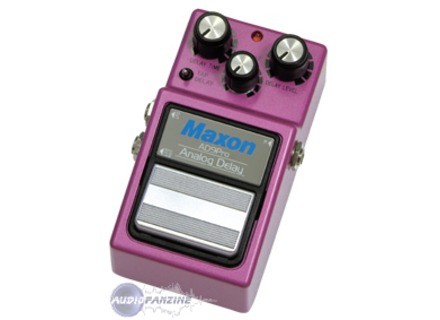 AD9Pro Analog Delay, Delay/Echo/Phrase Sampler for Guitar from Maxon in the 9 (Reissue) series.

Buy this productView price information >
View other reviews for this product:
Well, well, it's an analog delay Stereo output, mono input. The PDAL is a production of good quality trs very heavy, although the knobs prcis look just right.

The pedals of the three time limit possde potentiomtres of rglage that were found on all dlais: feedback, delay time and effect level. New: a mini switch that can switch between analog standard time limit a "dual delay" simulation cho bands dixit advertising.
It would have t can be nice to have a tone knob, though ...

Wow, slap the total. It's been a while since I was looking for an analogue time limit, and I finally found the gem.
I possde a Boss DD20 I am satisfied with TRS, even if I think I use it less and less. Most of the time I used it for a time limit of analog modlisation relatively average time (around 400 ms) and not very strong. This is to replace in this role that I love this Maxon. In this context the fact that Maxon trs trs good job.
Well, it's an obviousness, but it may be worth remembering. This type of time limit does not reproduce exactly what you just played. If the reproduction is relatively Premire Fidler, the sound of rptitions DGRAD is fast enough. No comparison was therefore be made with standard dlais numriques.

What else? Time to time limit goes up to 450 ms, which is very well (most analog dlais go up to 300 ms which is short hair for me). I think relatively little use the "dual", even if in Stereo, she brings an enormous breadth to the sound.
Unless the effect level to more than half of the race, in which case you can play "against" time limit in wedging his sentences on the tempo of the time limit, the pedals sound adds r verbr the most beautiful effect: it is in any case that I use is: delay time to 3 / 4, effect level and feedback to half: a, I a Cho s'vanouit quickly rverbration natural trs. I who does the lev dlais rverbs and Boss, this is all really new to me

I am discovering the joys of self-oscillation: my ears still remember ... (For comparison, a no, but then nothing to do with the nicknames self-oscillations that can occur with a time limit numrique).

Much of this good time limit is the total absence of clock noise and other typical default dlais analog. C'tait my biggest worry is because I wanted the grain with the purity of analog digital again (dtails of the why and how are disposed on the Maxon site). Here I am used to and nothing but a, it is worth its price.

on the other hand, a bad point for the switch to a certain point, turns off the sound ... I noticed this dj default on CS9 Pro (see my review for this pedals) I also. This is not a problem for me too because the effect is almost all the time engaged but hey, even when, this price the guys Maxon could make an effort, shit ...

I bought a few days ago and took the time to try it from top to bottom throughout the weekend (at the same time, three knobs on a weekend, is going ...).
I do not regret my purchase at all, given that with my set trs trsrduit of pedals, I finally have the sound I was looking for ... pfffiou ...
That said, the price of hardware is objectively a bit and I lev rflchi twice before offering it to me. Too bad, I could play it for a while otherwise.
See the source
Did you find this review helpful?yesno
Cookies help us improve performance, enhance user experience and deliver our services. By using our services, you agree to our use of cookies. Find out more.