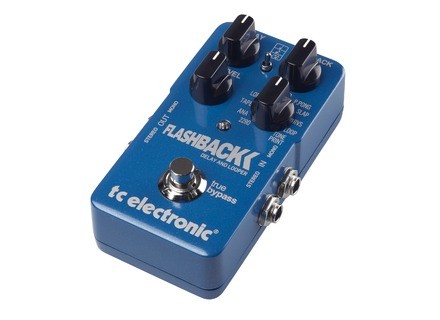 Flashback Delay, Delay/Echo/Phrase Sampler for Guitar from TC Electronic in the TonePrint series.

TC Electronic just started production of a series of seven "simple" stompboxes! It's a sacrilege if you know a bit about this company, which specializes in rack and programmable stompboxes, but it's also good news considering the success of the Nova series. This new range provides all the elements of a standard pedalboard: distortion, overdrive, chorus, flanger, reverb, delay, and even vibrato.

Four of them feature a strange function: the TC TonePrint, which allows you to expand the possibilities of each stompbox via the Internet. This feature will certainly make TC a fav among young wolfs with a pair of jeans looking for adventure instead of pureness. Today we will review five of these seven new TC stompboxes. 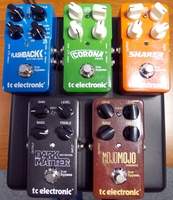 The Mojo Mojo Overdrive and Dark Matter Distortion stompboxes are the only analog devices in the series. Unlike all others, they don't provide too many connectivity options: mono in + out. Although TC is mainly known for space and modulation effects, both stompboxes are distortion pedals. Considering the huge offer available within this market segment, it's not very likely that these stompboxes will leave their mark in the history of distortion... However, you can appreciate the effort put in the conception of the housing: it's really easy to access the battery compartment using only one screw (you can turn with your pick) that holds the protection plate. The slightly recessed connectors allow you to save space on your pedalboard and seems to be conceived to avoid "tap dancers" having a strong and imprecise kick from damaging their gear...

In spite of its gloomy name, black finish and Star Wars-like logo, the Dark Matter is a pretty versatile distortion for rock/hard blues players rather than for metal heads. The controls are Volume, Drive, Bass, Treble, and a mini-switch to toggle between two low-frequency responses. To be honest, I couldn't notice any (obvious) difference... The Dark Matter can produce a rather high amount of gain and its crunch setting is also satisfying. You get a rich, well-defined, sharp, all-round sound reminding the Boss DS-1, but a little bit more hollow and with more precision thanks to both the Bass and Treble settings instead of a single tone control. I tried out the unit at home on a clean channel, and also live as a drive booster on a crunch channel. In both cases I liked the Dark Matter very much!

Dark Matter example: first the controls set to 0'20 and then a high-gain sound. Crunch at 1'22. 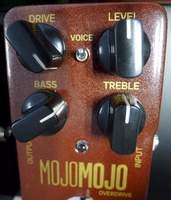 The Mojo Mojo is an overdrive effect pedal including the same features as its black brother. It produces much more mid frequencies, the sound is fatter, but the gain range is less wide. The mini-switch is intended to boost the mids, but it is not more convincing than the switch on the Dark Matter. The Mojo Mojo has a mammoth sound character, the tone is very earthy and brings you to the world of southern rock. I tried it out at home on a clean channel. I played a lot of slide blues guitar with this stompbox. I also took it to a live gig to use it as a drive booster on a crunch signal. This time around the stompbox was less convincing: the sound had too many lows and the Mojo Mojo is simply not conceived for this purpose.

Mojo Mojo example: first the controls set to 0'19 and then different gain settings. 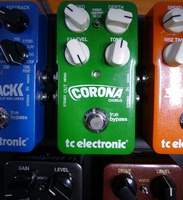 TC's Toneprint concept is quite simple: it allows the user to download a small software directly into the stompbox via an USB port in order to change its behavior. We don't mean presets but a new internal DSP programming that changes the basic functions of the controls. This way, you can change the effects' rate speed, increase a chorus fourfold, excessively alter the frequency response of an echo effect, turn a vibrato effect into a flanger or a delay into a chorus, etc. On TC's website, you'll find a whole bunch of Toneprints created by famous musicians: Bumblefoot, John Petrucci, Guthrie Govan, and many more... At first I thought every user could create his own Toneprint but it isn't quite like that. The true fully programmable stompbox is still to be invented, although some manufacturers have taken steps in that direction, for instance Line 6 with the Developer's Kit or Openstomp with the Coyote-1. Unfortunately, their programming is still somewhat complex for musicians who are no computer freaks. I bet TC's stompboxes will become a standard in every pedalboard all over the world and that the manufacturer will provide us with an open source piece of software that allows us to create our own Toneprints! Are you saying I'm naive? It seems that Toneprint stompboxes eat batteries for breakfast... I used a new battery in the Shaker for a live gig and it was empty by the end of the show. 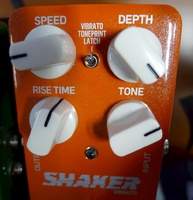 Mono in and out for the Shaker. You get four controls (Speed, Depth, Rise Time, and Tone) and three modes: Vibrato (normal), Latch and Toneprint. The presence of a Tone control in a vibrato effect pedal is a bit surprising but it can be useful to darken the sound, for example when you load a chorus Toneprint. The Rise Time parameter adjusts the effect's progressive rise once you turn the pedal on. This function is especially useful in Latch mode where the effect is on only while you hold your foot down on the switch, which allows you to use the vibrato effect only when it is necessary and to create unexpected effects. What else can we say about a basic effect like a vibrato... It does what it is expected to do: nice modulation curve, no sound coloration... and that's it! The available Toneprints for the Shaker are quite surprising: from a simple waveform alteration to dramatic changes into chorus or resonant flanger effects (check out the examples). From a technical standpoint, vibrato is very close to chorus, except for the fact that the chorus delivers the dry signal AND the modulated signal, which is actually the reason for the typical doubling effect. Since what we have here are programmable digital stompboxes, we regret that the Shaker Vibrato and the Corona Chorus were not mixed together in one single stompbox, because vibrato is rarely used. The Toneprints provided by TC for the two stompboxes show that you can switch between both of them without any technical difficulty.

Shaker, Normal mode: Clean with variations and then with distortion at 0'35.

Stereo in and out for the Corona. You get four controls (Speed, Depth, Level, and Tone) and three modes: Chorus (simple), Trichorus (complex) and Toneprint. The normal mode is a reissue of TC's legendary SCF. The Trichorus is a three-voice chorus effect that shows its true power in stereo but also sounds very nice in mono (I apologize for not having recorded the Corona and Flashback examples in stereo). The Toneprint mode loads the downloaded software into the stompbox. Although I'm not a chorus fan, the Corona surprised me because it generates absolutely no noise, it reproduces the timbre of the instrument pretty faithfully (it also performs very good with a bass or keyboards), and it offers virtually endless setting possibilities. The interaction between the Depth and Level parameters allows any imaginable sound variation — from wide and subtle to dark and brutal effects. The library of Toneprints on TC's website goes far beyond the sound scope of standard stompboxes. Famous chorus gurus like Andy Summers, who uses a high offset time, John Scofield, who uses a very detuned chorus, Mike Landau, etc. immediately come to mind. Anything is possible with the Corona. The only con is the Speed control that tends to increase the effect depth dramatically when turned clockwise. This means you'll have to compensate using the Depth control, which isn't the easiest thing to do when playing live. 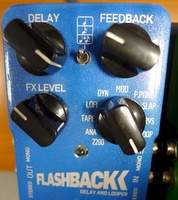 Here comes a direct competitor of the Boss DD-7 offering a stereo multifunction delay with stereo in/out, a 2290-type delay (TC's legendary hyper-transparent delay in rack format), a mini-looper, modulated lo-fi delays, dynamic delay, and reverse delay. All of them have a delay time of up to 7 seconds, a tap function and, of course, the Toneprint facility. Besides the basic settings (Level, Time, Feedback), a mini-switch allows you to choose between 1/4 note, dotted 1/8 note and the sum of both values (the legendary setting used by The Edge). The tap function is very convenient: just hold down the switch for one second (the stompbox mutes the signal), strum the strings twice and that's it (this also means that you can't adjust the tempo while you are playing, but keep real). Considering its size, the Flashback beats all records. Unlike the DD-7, you won't hear any pitch variations when you turn the delay control while the effect is active. No more tape acceleration effects nor other electronic noises. But the Flashback Toneprints are here to make up for them. You get a huge number of Toneprints: from simple EQ to excessive delay modulations, to weird rhythm patterns and even chorus/flanger effects. Check it out!

Don't Know Which One?

To conclude... Because of the similarities between the Corona and the Shaker, the latter can be considered a bit useless. Both distortion pedals sound good but won't replace any of my favorite distortion pedals. Maybe they ought to have a bit more personality... It's clear that TC is no distortion specialist, and targeting a wide range of musicians with two "neutral" stompboxes was the best decision, instead of trying to compete with ZVEX launching a 9-pot fuzz effect pedal. But it's up to you... and I bet you won't have a problem. On the other hand, the Corona and the Flaskback are must haves: great working tools and well thought out. The Toneprint function is almost like a toy. If you're looking for a chorus and a versatile delay, go for them! $169 for the Flashback, $129 for all others.

The examples were recorded using a JCM900 combo and a Two Notes VB-101 cabinet simulator. I used a Marshall 4x12" cabinet simulation for the right channel and a very present "self-made" speaker simulation for the left channel. I also used a Celmo Sardine Can compressor for some clean sounds. The distortion in the Corona, Shaker and Flashback examples are from TC's distortion pedals.