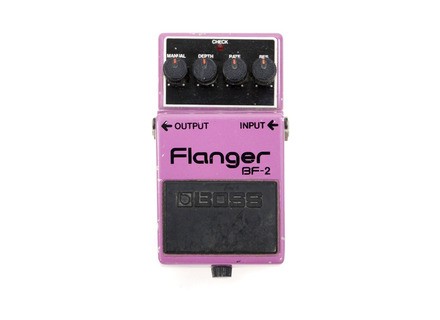 View other reviews for this product:
This is one great sounding flanger pedal. Some say the Japnese version sound more smooth and a little more refined than the Taiwan version but I think they are both the same. Unless you A/B them together that would be the only way to tell for sure and even still both version are fantastic. The change of manufacturing countries ended in Japan in 1990.

It is amazing how the limited number of amps and effects were back in the 80's to guys and still were able to pull off some of the best created rock tones to this day. Well it seems a lot of them would get really creative with the stuff that they had rather than gassing for something they didn't have.

Ronnie Le Treko used this pedal as a boost in front of a simple Marshall amp. He would run the pedal with all of the knob in the off position except for the level/volume/manual. This would give a midrange boost to the amp and would get that great tone he was so famous for in the 80's.

* The BF-2 exists in both metal screw and plastic screw versions.
* The earlier versions had all black knobs. These where later changed to the white top knobs. The change took place 1990, very close to the same time that production was moved to Taiwan
* There may be some BF-2's in pink. This was the original colour choice, but it was changed to purple in the last minute. Whether some pink ones exists out there is uncertain.
* The BF-2's design remained virtually unchanged through its more than 20 year lifespan. The TL022CP opamp was replaced with the Sharp IR9022 opamp at some point but apart from that, the ciruit remained unchanged.

The tone of the flanger is a very good and usable tone. You get a very lush tone that really widens the signal to explore warm flanger tones. Te flanger itself is a great feature but as a get more into guitar playing instead of effects using I find myself leaning towards using it as a preamp. If you run this pedal in front of a Marshall Plexi, JMP, or a JCM800 you can get a very cool and usable Le Treko tone or just a boosted midrange distortion tone. It is cool for getting that 80's grind that was distinctly 80's hair metal. This is a great little unit. It is a fantastic sounding flanger and the lush chorusy flanger effects sound amazing. So if you use it as a flanger it sound amazing and if you use it as a booster it sounds amazing as well.

These pedals have now been discontinued and have been updated with the Boss Bf-3. Pretty much the same pedal with a few minor and not that noticeable features. On the classifieds you can find this pedal for right around $50 or so. They are pretty inexpensive and not a big investment to find a cool effects pedal or booster pedal.