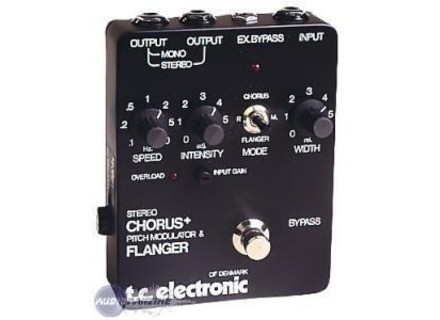 View other reviews for this product:
The Danish company TC Electronic is very well known for their innovative, top quality musical gear for both studio and stage.

The TC Electronic Stereo Chorus, Pitch Modulator, and Flanger (Also known as the SCF) is a bit different from most stomp boxes.Introduced in the mid 80's, the SCF was TC Electronics' stake in the game of tone modulating pedals for guitar, which was a popular niche in the gear market at the time. Rock guitarists loved the sound of chorus on their soaring solos, and experimentation with flange, pitch mod, and other wild sounds was at an all-time high.

The SCF Features a silent (momentary) footswitch, mono/stereo outputs, independent input gain control, along with Speed, Width, and Intensity controls.
The user toggles between Chorus, Pitch Mod, and Flanger using the 3-way switch located between the Width and Intensity controls. There's an overload indicator to alert you if your input gain is too high, and a jack for an external bypass switch, so that you can remotely turn the pedal on and off.

As an added plus, the pedal plugs directly into a power source with no need for an external adapter, eliminating the need for a space-hogging wall wart.


The controls are fairly easy to understand. Speed adjusts the rate at which the pedal modulates the sound with a given effect. Width adjusts how wide the sweep is, from 0 to 6. Intensity blends the individual effects with the dry signal to varying degrees.

The SCF is an extremely well-designed pedal in both sound and construction. It was originally designed for guitar, but Keyboardists have been known to take advantage of its capabilities.

The Chorus is very smooth and capable, going from light swimmy effect to nausea-inducing tone modulation all with a few twists of the controls.

The Pitch modulator is interesting because it isn't strictly a pitch mod, as it pairs the pitch mod effect with chorus to achieve a rather unique effect. Here, you can go from light overtones to raging pitch dissonance again just throughout the range of the controls.

And Finally there is the Flanger, which, like the Pitch Mod, is mixed somewhat with the chorus. It's not a particularly overpowering Flanger, but you can get some nice airplane sounds out of it with the Intensity cranked.

The TC Electronic Stereo Chorus, Pitch Mod, and Flanger is an enduring effect pedal that has seen a home on the pedalboard of many guitarists, and likely many to come. It's high price ($319 average retail) keeps it out of the hands of most, and that's a shame, because it really does offer top notch Chorus effect for those who are fans, and even on ebay can go used for upwards of $250.

The best bet is to give one a try at the music store, and make a decision for yourself whether this classic pedal is worth your investment. I certainly enjoy having it in my arsenal.
Did you find this review helpful?yesno
Cookies help us improve performance, enhance user experience and deliver our services. By using our services, you agree to our use of cookies. Find out more.