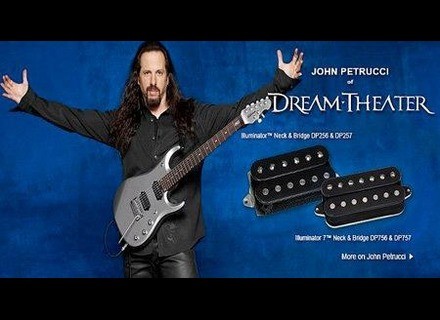 I bought this kit for my Musicman JP6 to replace my kit + CrunchLab LiquiFire, which I found too "neutral", despite their good quality ... and I confess I do not regret it! I first had the first version of microphones (those of origin, customs) which were good but they did not send enough (especially the bridge pickup) for what I expected from this type of guitar. I then changed the bridge pickup with a D Sonic, but I did not keep, I was not at all hung up on this model. So I kept 2 years Crunchlab + LiquiFire kit. This is a good kit, but the "neutral" side of the record, did not satisfy me and I confess, too, that my curiosity for this new kit, motivated me to change!
What I like most about this kit is the impressive clarity even with lots of gain. These pickups are clearer and accurate than Crunchlab and LiquiFire.
There are more presence and its overall less "big" and dark before, but suddenly, the sound that emerges is more accurate ... which ultimately goes well with the artist for which these microphones are intended.
Adherents great sounds, rest assured, it hangs well, there had to sustain as before, but suddenly, while I found the Crunchlab and LiquiFire a little mat (especially Crunchlab), then I Now a guitar with more personality, more accurate and a more airy sound.
For cleans sounds, they are clear, crystalline without being aggressive. They stand out well in the mix (that is valid for all types of sounds). Crunches on where the old kit could be a bit "cold", "right", then we can return more nuances of the game, especially on the neck pickup. Distortion, the bridge pickup is accurate, it hangs well chosen mediums are beautiful, do not attack the ears and clearly illustrates each note. Solo the neck pickup always restore well pick the attacks and the sustain is waiting for you. It is in the spirit of the previous, but with superior clarity. So especially in the pickup that the difference can be heard.
Note that the two microphones are now ceramic, while the LiquiFire was an alnico V pickups have 4 and are therefore split-son.
While the new kit does not revolutionize its predecessor, it is still a nice development, but more importantly it gives extra personality, more finesse in the final rendering. I think this is really important for any musician. I also have a Les Paul and PRS guitars which are two of the temperament and now my Musicman differs from these two, with its own personality! All the microphones that were created for John Petrucci, I think they are the most successful. They are not given in nine, but they compete, I think, no problem with pickups "customs" and often much more expensive, so the price does not bother me in the end. I do not regret this purchase.
See the source
Did you find this review helpful?yesno
Cookies help us improve performance, enhance user experience and deliver our services. By using our services, you agree to our use of cookies. Find out more.