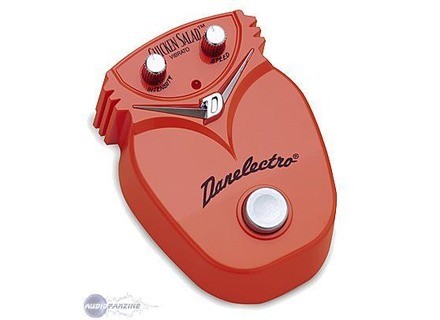 DJ-15 Chicken Salad Vibrato, Tremolo/Vibrato for Guitar from Danelectro in the DJ series.

View other reviews for this product:
PDAL of vibato could not be more basic. an activation switch, two knob: intensity / speed. a diode to see the activation of the effect. everything is plastoc. ca seems to want to hold all the same. anyway I think that those kind of screw up their pedals, jumping like crazy on the switch with their new-rock bttn arm s'interressent this kind of gadget!

No manual, no need one quickly understands how it works (and where are its limits ...) how can a small pedals also eat it as much elec! You play two hours and walk more! (Luckily there is between 9V adapter) it's pretty abbrent. because it's true she was a mimi the pedals! we could fouttre three like that in the main (bigger picture. you see the well is even smaller!)! standard benefit as many space-saving compartment the plethora of other pedals out there. by tiny knob against implying a manipulation of tweezers if you want a bit of rglage prcis pedals but this is not essential ....

Ouahh which transition! I said then that there was no need for a very precise rglage PDAL for this and for good reason: it is far from being versatile! it is always the same type of sound. rglage the speed (speed of variable frequency drives) is sufficient: we go from very slow (a "wave" for two seconds) faster (about ten per second) no-hit with a deletion of any foix acute note for the "bottom of the wave." rglace the intensity (amplitude) it is not up to what you would expect. AC is set to max as soft vibrato and then when you max c not bother to listen we will hear that little variation in the pitch. another black spot, the effect the scheme will always modified to your guitar. when all are at least knob means even when the effect is l. ca is a sound with a kind of rsonnance in acute enough to hear brand without any vibrato ...:$ good, we can say that I said that the black spots but it's still nice that pedals ... it's just that there is not a true quality that stands out and that could be mentioned. It can be used for funky pot (with a slow speed and low depth) or if you push the depth, it makes me a lot on the riff hendrix.

I've had one or two months and I quickly made the turn! is not the pedals that will rvolutionner your phonebook for sure. but good for the price (60) can be fun "piss" to give a song with a cool vintage effect. on the other hand if you want a vibrato really useful and effective .... will go your way
See the source
Did you find this review helpful?yesno
Cookies help us improve performance, enhance user experience and deliver our services. By using our services, you agree to our use of cookies. Find out more.