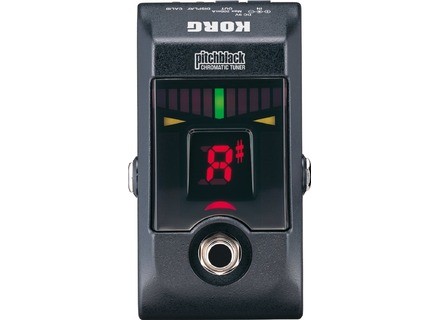 View other reviews for this product:
This is hands down the best tuner I've owned. It extremely well built; I've been gigging mine for years and had no issues. The display is really bright so it is easy to see in dark clubs. During outdoor gigs there are no issues either, even in bright light the display is easy to read. The face that its easy to see in any light comes in really handy. It is also a little cheaper and much better than the BOSS equivalent. You can't go wrong.

I've been using this tuner exclusively for the past 3 years or so. I've used it extensively for gigging like I mentioned before, but I've also used it to setup my guitars. It is accurate to +/-.1%, which is perfect for setting the intonation on a guitar. Since the tuner is chromatic you can use it to setup a guitar in any tuning. It is really handy.

I also really like the simplicity of it. There are not any unneeded bells and whistles, it does one thing and it does it extremely well. It will accurately tune your guitar.

Before buying the Pitchblack I owned a BOSS tuner, I've also used a bunch of built in tuners in multifx units. The Korg tracks much faster than any of these other tuners. It also seems better built than most of them.

Another great feature of the Pitchblack is the true bypass feature makes the tuner completely transparent. The TU2 used to really color my tone when bypassed, along with all the other tuning units I’ve used. It is not something that happens with the Pitchblack.

I realize this review pretty much sounds like a sales pitch, but I honestly can't find anything wrong with this tuner. Its fast, accurate, and cheap. Whats not to love?