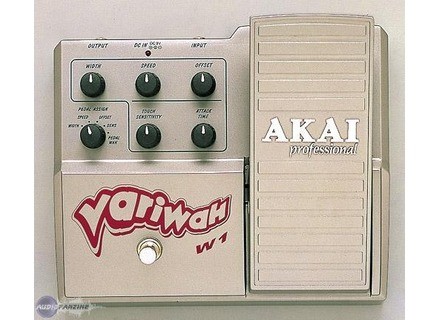 View other reviews for this product:
Wah is a digital effects made up of 5: 4 auto wah wah and a conventional. It operates on battery or adapter (9 V). An input jack 6.5, a mono output jack 6.5.

It is easy to use, the settings are very intuitive and complete. The possibilities are many nuances, took me some time to do them all!

The auto-wah are excellent thanks to the expression pedal, you can control various parameters such as depth of the "wah", the speed of rotation, the tonal range ... They respond well to the attack of the guitarist (this is an adjustable pedal settings).
The conventional wah on it, well ... is a conventional wah! It covers a wide frequency range, is not too noisy or too muffled.

It is a very versatile pedal (not as a typical Vox) and awfully good. I bought the foundation for funk, but on a big solo saturated it also works wonders!
I bought it new shortly after its release and, had I known I would have expected to find OCCAZ because when she came out it cost really expensive ...
This is one of the few to offer a wah pedal and wah car of this quality.
See the source
Did you find this review helpful?yesno
Cookies help us improve performance, enhance user experience and deliver our services. By using our services, you agree to our use of cookies. Find out more.