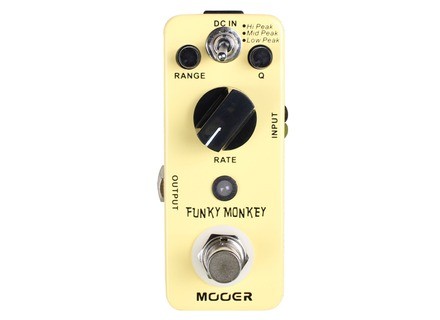 Funky Monkey, Wah-Wah/Auto Wah/Filter for Guitar from Mooer in the Micro series.

Value For Money : Excellent Audience: Anyone
Buy this productView price information >
View other reviews for this product:
UTILIZATION

This is a small pedal. If you do not like small pedals, then this will not be for you. Don't buy a pedal that you know in advance is small and then complain about it's size.

Even though these are small pedals they are not too difficult to dial in, unless you're inexperienced and/or have fat sausage fingers.

It would be nice if Mooer had put small white dots on the two smaller knobs, but that is easily rectified with a little paint.

I'm a power seller on eBay for vintage music equipment, especially pedals, and I've bought and sold literally thousands on them at this point. As such, I've had the opportunity to try out more rare, expensive, and obscure pedals than the average person ever will. I'm fairly adept at judging what is a good sounding pedal and what isn't or what is a good value for the money and what isn't.

Personally, if you're looking for a cheap auto wah and can find one of these used in the $40-$50USD range, then pick it up. Are there better and more expensive pedals that do the same thing? Sure. Of course. But don't ignore the Mooer Funky Monkey just because of it's size or price; it's a good pedal and I like it a lot.

With all of that in mind, again, I think this pedal is a really good pedal for the price. To my ears, through my equipment, it sounds good and I like it.

Mooer pedals can certainly be hit or miss, but in this case I think they did very well with the Funky Monkey. I've owned this pedal for over 4 years now and I don't think that I'll ever sell it. It's not something I use a lot or on a regular basis, but when I need this specific sound it does it's job and it does it well. This is the only Funky Monkey that I have ever owned, as I usually don't deal with too many modern pedals as I do vintage, and I've never felt the need to sell it. It does what I need it to do and it was cheap, so that's a win/win in my book.
Did you find this review helpful?yesno
Cookies help us improve performance, enhance user experience and deliver our services. By using our services, you agree to our use of cookies. Find out more.