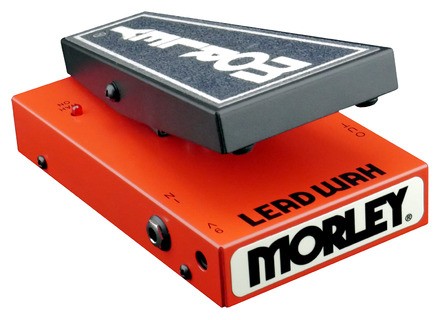 « The Sweep and Tone with High-Gain is Unbeatable »
5

Value For Money : Correct Audience: Anyone
Morley’s Lead Wah is one of the latest in the 20/20 family with many of the same great features. It is a switchless, optical wah, which means there are no pots to wear or get scratchy, and you merely have to step on it to engage the effect, or step off to halt the effect. The Lead Wah also has the 20/20 Buffer circuit to maintain that pure guitar tone you strive to preserve when you have a host of pedals on your board, or are running long cables on stage.

Other standard features include the exclusive Morley MQ2 custom inductor, built-like-a-tank cold-rolled steel housing, LED indicator and glow-in-the-dark treadle grip and toe-end logo for easy access and viewing on dark stages. The Lead Wah operates via one 9V battery or any 300mA 9VDC (negative tip) power supply. If using a battery, there is a quick-clip door under the unit for fast and easy changing. It comes with a typical one-year warranty, but that extends to a lifetime warranty upon registration – which means, it’s built to last a long, long time. It also has a reasonably small footprint, measuring only 6.85” (L) x 4.5” (W) x 2.5” (H) or approximately 17.4 x 11.43 x 6.35 cm.

Now, with all those features most gear heads want to know how it sounds, and the included video demo addresses that aspect without a doubt. Suffice to say, whatever Morley did to the circuitry for this wah version is pure ear candy. The Lead Wah was made for high-gain signals, although it does sound quite acceptable with clean or crunch tones. But with high-gain amps/pedals it sings with its loudest voice; it growls without honking and has a superb wide sweep that ranges from throaty to harmonically sweet without that trebly (and annoyingly harsh) bite.

Overall, the Lead Wah can be used with clean or slightly dirty tones, but it experiences its full potential with raunchy rhythms and, obviously, soaring leads. As simple as this wah is, with no bells or whistles like some of the other Morley models (e.g., the Wah Lock), it truly puts forth a great impression. At $149 USD, the Lead Wah is reasonably priced among wahs that will not disappoint.