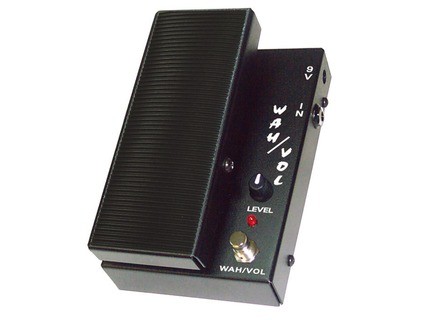 Mini Wah Volume, Wah-Wah/Auto Wah/Filter for Guitar from Morley in the Mini series.

This is a 2 in 1 pedal by Morley meant to save space on your board and put two functions together that would ideally be very convenient. A wah and a volume, both of which operate optically (that means with no pots but with light sensors).

Feature wise it's pretty good it's got everything one would really need for both a wah and volume in it's simplest form.

That's the only real difficult part, the rest is the same as any other foot-rocking guitar effects pedal. Pretty standard. It's smooth in terms of the foot motion and its construction is quite solid too. Don't see this mucking up on me down the road anytime soon.

One big beef with this pedal is the button seems to be a bit too close to the rocker pedal, i end up either not pressing the switch properly or end up moving the rocker which reduces the volume since it's in volume pedal mode. You have to be precise with your foot when you hit the switch, not very gig-friendly me thinks.

This is the hard part. It sounds decent as a wah. Stock it's quite shrill and bright on the toe down position compared to standard non-optical wahs. This has generally been the case with optics vs pots. However, there's the tech talk section on morley's site that's given me quite a bit of insight regarding adjustments to the pedal that can be made by just moving the optic sensors in different directions etc in the pedal. I've tried this and have come up with a better sounding wah sound, it's more throaty now and not so shrill on the toe down position.

As a volume pedal, it works. But it's not very good in my opinion. It just sort of has this jump from 0-5 (say 10 being the loudest) and then goes to 10. It's probably because of the optics and the time that the light catches the sensors, that just makes it engage and you hear a big jump. It's not smooth like a pot would be in that sense. It's still usable for swells and whatnot but definitely needs more tweaking with the optic sensors or I need to work around the pedal somehow and get used to it. But to be honest I'm not happy with it as a volume pedal. Too much adjustments needed.

Overall I'd say it's just an average pedal. I mean it's not great but it's not good. I think the wah sound is decent once adjusted, as a volume pedal you'd really have to work with it somehow, and also if you have small foot or narrow shoes you'll be fine with hitting the switch. I think the idea is good but it's not really the best version of the wah/volume idea. I also sometimes get confused with the pedal, sometimes my guitar signal is suddenly out and I don't know why, then i look back and yes it's my morley I left it in the heel down position thus the cut signal. Maybe it's just me, I like to save space on my board but if I keep running into this problem then a 2 in 1 wah/volume is definitely not meant for me.
Did you find this review helpful?yesno