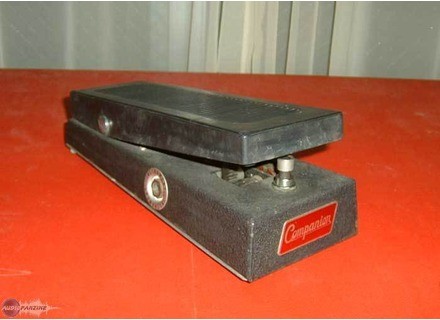 View other reviews for this product:
Analog wah 70s, Japanese-made. She no longer produced.
It works with a 9v battery, without outlet. The indoor circuit is simple, there's not much to see.
The pdalier is covered with a single hull rubber tends to crack over time. On mine I have you, because it does properly.
All metal is less than the pais Jim Dunlop, but tough. The same once she is lighter. In short, it's simple and effective.

It's a wah-wah can not be more conventional. There is no individual connections.

Inrush when the sound is much less garish than a Jim Dunlop, and consquent less powerful.
But playing with the pedals is a real pleasure, it is the "wah" velvet, round, soft, agables ear. The sound is vintage trs, and is closer to Vox, and Jim Dunlop era. I'm a fan of the old school, and I branch with config 'classic trs (Start + Marshall lamps.)
A torque phase, the rhythmic funk make specially good, and found the grain and biting of the era.
I strongly deprecated, or hard fans of punk, they will not find their account, because I RPET, smoothness and softness are the dpend power.
I put 9 for sound, but only my opinion, is a matter of taste.

70 bought on ebay the last t, I'm the only enchri have it, and I think I got a good deal. Prices are trs variables because it no longer produced.
I had a dunlop GCB95, and I must say that I do not use more ... I test before the MODEL Hendrix, who was closer to the type of sound I want, but there was an indescribable something artificial.
If I had to buy another wha, because it would be a TON more powerful, ideal for solos and other pests wild rhythm, which does not mean that I dbarasserais the Shin Ei, quite the opposite! Both would complmentaires trs.
See the source
Did you find this review helpful?yesno
Cookies help us improve performance, enhance user experience and deliver our services. By using our services, you agree to our use of cookies. Find out more.