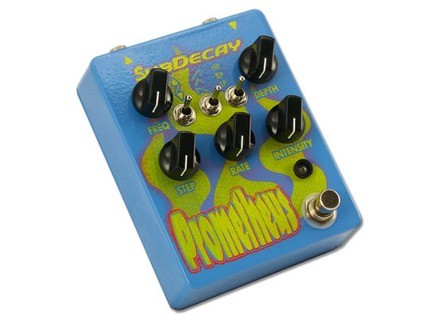 This is a resonant filter and a somewhat complicated one. It does forward and reverse filtering as well as doing sample / hold filtering for arpeggiated effects. It also allows you to control the low pass, band pass, or high pass filtering. There are a lot of different options here and it can be a little overwhelming. There are some video on YouTube that you can watch to get an idea of how to work it and some good sample settings.

The pedal sounds great. It sounds very hi-fi and doesn't seem to color or degrade the tone of the guitar or amp. As previously stated, finding the sounds you want can be a challenge, but playing and researching is your friend here.

There is a lot of fun to be had with this pedal. The sample/hold effect is something I always find myself returning to. It's just too much fun to use, despite it being difficult to not crowbar it into songs.

This is kind of touted as the big brother pedal to Subdecay's Proteus pedal. That's not exactly right. The Proteus allowed for a randomized sample/hold and arpeggiated effects. There is no such feature on the Prometheus. You can do the sample/hold thing, but it's not randomized. I am not so sure how much that will matter since the effect is so similar, but it isn't the same thing. An advantage with this pedal allows you set the exact speed that you want, so it makes it easier to use because it's more consistent.

Unlike the Proteus, the Prometheus does allow for the use of a 9 volt battery. That ability comes from the fact that the Prometheus uses a larger housing and takes up a bigger footprint on your board. Not even close to that of the old Robotalk pedal, but it's bigger than the standard MXR sized Proteus or the ZVEX Ooh Wah.

Subdecay has just released the Prometheus DLX, which likely has the randomized feature and probably a bunch more. That's just another option in sea (okay, more like puddle) of arpeggiator effects, but this is great, too.
Did you find this review helpful?yesno