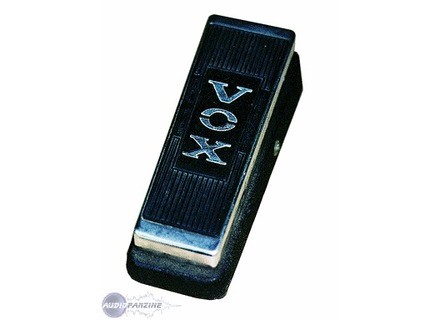 View other reviews for this product:
Input / output, AC switch 9volt standard boss trigger true bypass (the sound happens when there is no plile or adapter connected) not hatch for the battery so you need a screwdriver and unplug the guitar is imperative to preserve battery.
Note remains 10 because if you plug your guitar plug on nuclear power to your pedals as it avoids the recycling of batteries. However, the consumption of this pedal is 0.54 mA, ie from 10 to 20 times less distortion than analog and 100 to 120 times less than a small digital delay is nearly 500 hours (twenty days without disconnect) with a good alkaline. 5 or more 6 volt battery weak enough and the sound becomes even softer (it's the same with a tube screamer)

The switch takes two seconds of thought to its operation and the pedal travel remains flexible and is ideal in the position where it is left as the dunlop sharing the same box solid, stable and indestructible

The difference with the classic 847 Vox reside in the adapter plug and the true bypass "inducer" major component of the effect. here it is the "red Fasel" found on the reissue of the "Dunlop Crybaby Classic" sound generated by these two pedals is very similar and you have to be fussy to make a difference, however, for using the cry Baby Basic Morley then I can assure you that we are not in the same vein with the vox. The amplitude is deep and warm the midrange fuse in a steady to finish in the acute howler that require good accoutumence to master. This effect needs to be used sparingly in saturated mode as it literally scisaille head (see Hendix J) but is bright and sparkling mode rivals the best phaser or flanger pedal for some people to know the tempo (see Dave Stewart )

Forget the vox 847 which is only a cheap copy of the original Vox. The Clyde McCoy is almost double but it was amply justified by RMC copied or Fulltone at prices over $ 230 so far to the original.
this version is not sold in France must therefore be ordered to United States for $ 150 plus $ 20 ou25 transport suitable sites and ten days of waiting.
the dunlop classic is imported so you can try it and come away with but now if you want to find your Wah in black on the scene with the full face SUIT there that cover the chrome with her vox logo does.
it's around 10 because it is the best reference if ...?
See the source
Did you find this review helpful?yesno