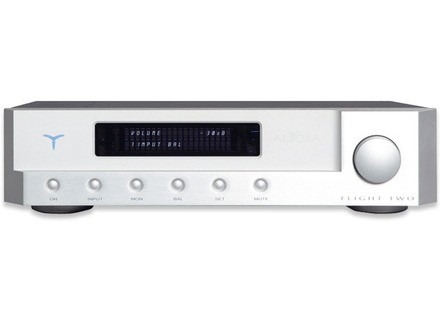 During my test various accuphase, McIntosh and other Luxman, an amp caught my eye.

Forcing more to be interested (similar to Accuphase integrated digits).

The block was visually better over all suitors cities, which attracts and reinforces curiosity, the price of 3,700 Euros was also lower than all other integrated tried in recent days. It burned me so check it out. To do this, I always had the same string consisting of a Accuphase DP-400 and B & W 804D speakers.

But how do you mean "better finished"? In terms of design first, with richer forms. Metal buttons that we want a strong box and without the use of plastic in any place whatsoever. The cover sheet and the edges were, indeed, stronger than the accuphase. A meditation. A quick look inside allows me to see that we are face to serious work. The seller tells me that Audia is assembled in Italy, with a subcontractor who normally delivers military equipment (satellites, radar and other). It happens to any comments and deserves admiration. In practice, we see that the amp is full of tricks, for-example, a control, input, the gain applied to the latter, one can rec output servire sub output. There is also a very gradual volume button. Perfect for fine dosing increases signal.

This amp is worth its price. By allowing the madness out more information on the disk that Luxman combination. The Two also makes some small defects Japanese integrated in depicting less detail in all frequencies. But it goes deeper still in the field.

Typically means a bass with his chest, but no crunch, the roar of the box is just a bit portrayed, without having the full depth of the signal. The work of a singer singing is not fully revealed. No dampness lips, no audible breath work where there are, depending on integrated.

This can be seen on the guitar J. Page of these lives, I do not mean small mistakes in his game, I paid a little less than a grain of guitar, but I always have more than the Luxman 505. Ditto if you go to Nirvana. Faults Kurt, more obvious than those of Page, shown here, but a little less obvious than the Accuphase. The grain of the guitar and is now richer / complex than the Luxman.

Supported on pieces, the overall momentum is there. It's going forward. The pan is very good, with a good sound off the speaker and artists goods placed in a room that has the width. The effects left, right, show an obvious ease of this integrated these games. A little less depth but as my references, the instruments will look far less tumble or less deep.

Richer than the Luxman, and less detailed than the Accuphase, Audia this seems to be the intermediary for all those interested in listening to music at a very high level without necessarily putting a price crazy. Its phono input is very good, it is full of smart little ideas (but that make its use a bit sharper), the quality is obvious ... that you ask?

The excellent note explains, as he walks on the heels of the McIntosh MA6700 integrated, but at half the price.
See the source
Did you find this review helpful?yesno
Cookies help us improve performance, enhance user experience and deliver our services. By using our services, you agree to our use of cookies. Find out more.