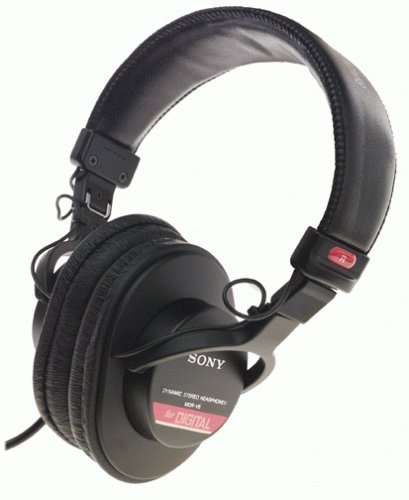 HiFi/audiophile headphone from Sony belonging to the MDR series.

View other reviews for this product:
SpiralShaper

Publié le 06/03/15 à 19:38
Value For Money : Excellent
Audience: Advanced Users
The MDR-V6 are the big brother of the MDR-7506. They are driven by CCAW electromagnet voice coils, giving them a frequency response of 10Hz to 30kHz which far outstrips the 7506's. The V6 are not as new user friendly as the 7506's either. Where the 7506's sound like headphones, making them easier for a beginner to mix with, the V6's have a much more natural response. The lower band response gives it less buildup in the 60-120 Hz range than the 7506's. Because of the increase in 10Hz response and 7.5kHz+ response, these headphones can sound spitty due to the tighter attacks. The dynamic response is much more sensitive on these phones, and therefore the mix sounds deeper. The higher bandwidth makes the frequency spectrum taller. The V6's make everything from your stereo field, frequency spectrum, and dynamic depth all sound gigantic, albeit sometimes to the degree of sounding sparse. In my experience this is a fact of the phones, and helps create dynamically complex mixes when run through less dynamic speakers.

Overall I'm happy with the way these phones affect my mixes. I used to glut 120-240Hz in my mixes because of the increased bass response of the 7506's and the V6's remedied that problem. They are not a beginner's phone though for the complexity of their output. I VOTE 4.5/5. My only major complaint is that the phone cups can be rough on the cheeks after many hours and the amount of sweat that builds up in them.