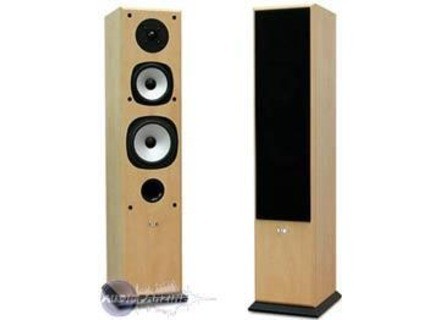 Value For Money : Excellent
View other reviews for this product:
- How long have you use it?
In recent weeks! But then, all the time! I'll have to think down in my studio, me

Seriously, since I have j'coute three times more music. Except rptitions few hours of sleep and even when.
Usually, an APRS RPET, I need calm. The coming out of RPET, I throw the string to get me a disc.

- What is the particular feature you like best and least?
The best: the sound
Minimum: a bin will push me to change my amp, a

- Have you tried many other models before acqurir?
Not bad, yes. In fact, with my sweet, we went around all the stores of his / hi fi corner.

- How do you report qualitprix?
Trs good. 750 euros a pair and its really, really great.

- With the exprience, you do again this choice? ...
Ben, the exprience ...
We'll see. May be I will fall on the speakers that seemed better for less, but good. Listen to I'm not pregnant every day!

In fact, I m'aperois browsing the web that these speakers have a great rating. I do not even know this brand.

APRs have toured DIFFERENT stores around my home (+ FNAC de Rennes) offering all the same a few things, I'm all that I had a shop repre 45 terminals. Brittany for the south, this is "the Son Peder Auditorium (http://pederson.fr/)" Ploeren between Vannes and Auray. I wanted to Listen to B & W that I had recommended on AF.

Dj good impression can of stuff, but apparently the right choice. Gender not 36 products in the same range. A nice guy. It could cost more quietly pairs of speakers (the Triangle and Elac pretty ho hum). I brought the CD that I had to choose my monitor speakers.

Stayed there for two hours to cost three pairs of speakers: one can say that gives us time.
Ds that AE t put it costs, the choice appeared empty. They taient hair cell in the budget.
The guy knows his mtier

But it's not a push-to-crime. I brought my amp to the doc. He did say that we should not have the same thing esprer with my Pioneer with its Cambridge, but that would have the same and when I can always get an amp later . He made us listen to the speaker amplifier 460 euros and not a trick 1000 euros.

He has not pushed for us to take Cables (when I handed him a big boom that has seen seemed logical). For him, with the classic cable, since the amp has enough. He was right. Similarly, he said that not c'tait ncessaire connecting speakers in bi-amp cblage seen. That's when even I did, having APRS cblage simple test. There is a more lightweight, lightweight but very lightweight. He was right. would not have been worth it to buy more cable, but hey, as I had in Reserved ...

For the price, well it seems that we have had to pay same price on the net, which for a small shop is when Specializes same class. Note that this is not the case of the corner store Boulanger I o card not 200 euros with the net!

If the music stores could be as a :-( (
See the source
Did you find this review helpful?yesno