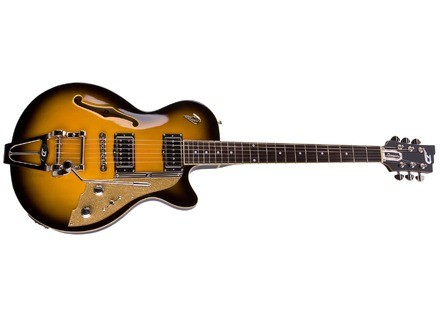 View other reviews for this product:
Guitar Duesenberg, German mark, which should cost in 1000 or € 1200.
Spruce (apparently) quite unique power, and the rest of maple.
A humbucker acute, severe in a P90.
Vibrato type Bigsby improved very effective.
One volume, one tone.

The Bigsby is improved, it goes further and is more flexible than traditional Bigsby. Tune the guitar did not have a pet.

I read in an earlier opinion that someone described the sound as being halfway between a Gretsch and a Les Paul. It seems to me not stupid.
It's not as fat as my Les Paul (Burstbucker 2), there's also more gain and more bass.
The sustain is very good course (but which now has a bad guitar sustain?).

It was a sound rather medium without the shine "fat" The Pauline, a little drier then, but with nice round bass well. We find this round into the treble.
The attack is very straightforward, even without the sharp edge and shiny.
That's cool!

A great guitar is not mine, and I'm already filled with those I have, but I understand that many have fallen in love with.

It is not given on the other hand.

Try
See the source
Did you find this review helpful?yesno
Cookies help us improve performance, enhance user experience and deliver our services. By using our services, you agree to our use of cookies. Find out more.