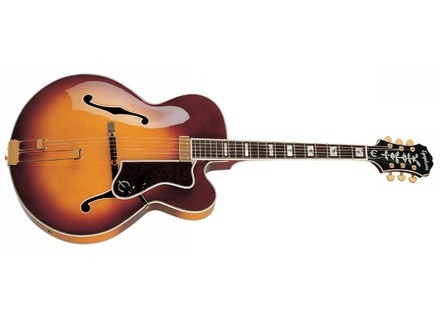 View other reviews for this product:
I bought this guitar as a scratch and dent model online from Musicians Friend. I paid $539 plus $85 for a case.

I had owned an Epiphone Blues Zephyr Deluxe for about a month (bought online also from Musicians Friend). I was so impressed by the service, setup, quality, feel and playability of the Zephyr Blues Deluxe that I wished I had the same guitar with no pickup or a floating pickup. I then became aware of the Emperor Regent as the same guitar with a spruce top, slightly different and more authentic Epiphone classic inlays and a floating mini humbucker. I found the Emperor Regent to be a much lighter, brighter and better guitar for backup to my vocals. It has a very 50's, swing, big band jazz chunk plugged in. Unplugged it is significantly louder than the triple pick up Zephyr Blues Deluxe and feels and sounds very different, in a good way.

The action is a little higher than the Zephyr and limits any soloing high on the neck (although this kind of work is not my forte, anyway). I have never owned an archtop before and my only unplugged experience was playing a Detroit radio station band members 1953 D'Angelico. That singing sound and volume spoiled me for any archtop I touched in the years since. This Epiphone is wonderful plugged in with just enough amp to add bass and volume without getting in the way of the acoustic swish. Unplugged it is clean and pleasant and a lot of guitar for the money, but certainly short of the great archtops that would cost 4 to 10 times as much.

This guitar's finish and fit is flawless. It is even more perfect than the Blues Deluxe, and that is saying something. The only scratch and dent attribute I discovered was a significant one. The neck is separated from the fretboard by about 1/32 of an inch just below the nut for a couple of inches. It looks like someone (maybe during setup in Nashville) cranked the trussrod adjustment a tad too much and caused a hairline crack. This has been repaired by placing a cloth looking spacer under the bridge to compensate and make the neck straight. The playability and intonation do not appear to be affected in any way. I got a couple hundred dollars off for this defect but, if I had known of the nature of the defect, as opposed to a finish blemish, I probably would have opted to pay the extra 200 dollars so that I wouldn't have to worry about adjusting the neck if need be in the future. Based on my experience with this imperfection, an unblemished unit is probably the best archtop guitar for the money anywhere right now.

I own six guitars and it's this Emperor Regent I grab first when I feel like playing, especially if I am singing. It feels like I have been playing it 40 years already.