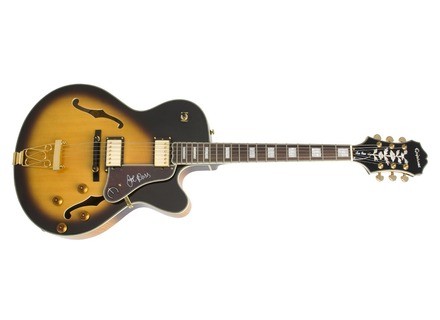 View other reviews for this product:
I bought it used for $399 (with fitted hard Epi case) at Guitar Center Hollywood Fla.
Its striking looks dragged into the small room it was in. Once I picked it up and
played it I couldn't out it down,

TWO other shoppers in the store followed me around the place (like two cats
following someone with fish in his pockets) waiting for me to put it down.

While on line waiting to pay for it, one offered me $100 more than I was
paying for it

BOTH were there wanting to play it, and lamented not walking
into the store 10 minutes before me.

I should get a commission, one wound up buying NEW ones in stock.

In a Fender Ultimate Chorus amp it sounds great, in my younger days,
I didn't much like wide bodies because solids offered more versatility
being able to play them with some watts behind them. The wide bodies
always fedback, and vibrated too much when you tried to get a rough
sound.

Modern amps make all that vibration a thing of the past, and with that in mind
the "Joe Pass" is far more flexible than a LP, Strat or even an ES335 class body.

I've played and owned just about every high end hollow, and semi
hollow from the 50's, 60's and 70's this box stands shoulder to shoulder
with them. It may not have the "I broke my bank account" status behind
it, but that's cool. I can buy other more sensible luxury items that really
do make a difference when comparing price versus features.


The only "imporvement" I could make is to make the pearl
in the head stock more delicate. This inlay looks rather "FAT"
I'd prefer a simple gibson crown type of inlay. But what's done is done,
some people really like this ornament... perhaps they were hookers
in a previous life ?

I could only find one minor flaw... and that after examining if for several
minutes in the store. Visually its top notch. It must be pretty durable because
I found out that it was made in the late 80's , possible early 90's

I'd like to own one in every color combination

I really could considering
the ridiculously low retail price of less than $600 Hey, my wife does it
with shoes, why not a guitar?


This review was originally published on http://www.musicgearreview.com
Did you find this review helpful?yesno
Cookies help us improve performance, enhance user experience and deliver our services. By using our services, you agree to our use of cookies. Find out more.