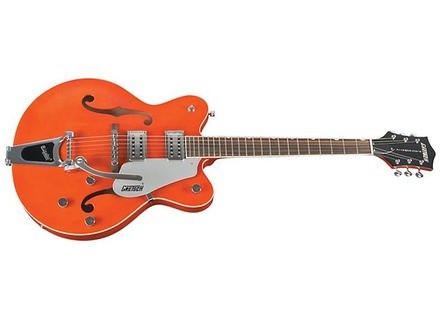 View other reviews for this product:
Made in Korea.

Set neck, normal for a half case.

22 frets, two kinds FilterTron weird microphones but the sound of a Caribbean FilterTron.

A general volume, a general tone and volume micro and micro 3-position selector.

The handle is niquel, access to acute fire of God.

In terms of form, shift box, I find it a bit late because I just classical, but it's still fine, resonant and pleasant.

For her, one branch to meu the amp is a very credible, it sounds a little.

So the sounds, let's go. Proportionally, this guitar has a strange presence in the high mids. One thing that quickly became annoying to me, to the point that I stopped playing the guitar. Mediums that give the impression that we will nosebleed, really weird.
If not all Gretsch Electromatic, it does not compare to one made in japan or U.S. (try one behind the other in the same amp, same channel, same setting, day, night). But good considering the price of U.S. and japan, we can settle for a electromatic. The difference in my opinion, it is a matter of microphones, as with traditional upgrade of putting on authentic filtertrons electromatic, it is very far from a autentique.
This difference comes from the violin, the handle is designed to be virtually travesrant on japan-US giving a crazy sustain and a much more focused in the acute and less serious presence (we are guitarists, bassists not ).

I played on a gaggle of amps, marshall transistors, lamps, lamps Vax, ENGL lamps, hybrid fender, and it stays the same, the serious and unpleasant presence in the media.

I note sounds wrong level because for me this guitar is very disturbing and very unbalanced.

I have used a few months, then I row before the sale.

I had a 5120 at the same time, and I stayed in 5120, before giving me a white falcon, and I put all electromatic in the basket "weird guitars too serious" since.

I liked its ergonomics without doubt one of the best that I have ever trying to date.

Qulité price level is quite good if you like that kind of guitar and we can not afford to allow the range above. I put average overall because this guitar kills its visual promise with a really weird and unbalanced sound. Maybe someone else will like, but it's not my cup of tea.
See the source
Did you find this review helpful?yesno
Cookies help us improve performance, enhance user experience and deliver our services. By using our services, you agree to our use of cookies. Find out more.