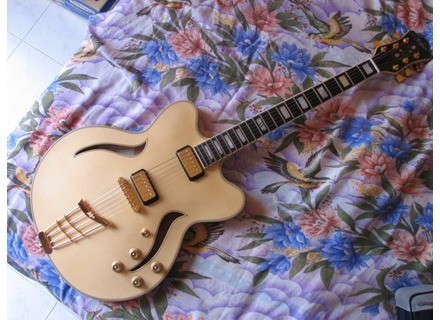 View other reviews for this product:
The Hofner Verythin Classic is a reissue of the company's original highly noted semi hollow body guitar from the sixties called the Verythin. It has a very thin (!) double cutaway body with a center block of wood down the body a-la a Gibson ES335 guitar. It features a German spruce top (unusual wood for any electric guitar), flamed maple back and sides, a maple neck, an ebony fretboard with 22 frets and block inlays, Schaller M6 tuners, a roller bridge (again, a tad unsual to find, since this is a fixed bridge instrument) and a pair of Hofner 514 mini humbuckers, It also comes with a nice hardshell case and is made in Hofner's premier factory in Germany.

The design of this guitar is fairly ergonomic to me. Compared to a typical Gibson ES-335 or a similar copy, the guitar is bigger overall (in its shape) but it is definitely a thinner instrument than a 335 and it also feels lighter to me. It's not noticable at first but after a while of holding it and playing it, the guitar does feel lighter overall. The shape is like a slightly bigger and thinner version of the ES335, so it's really a matter of whether you like a big body. It's thin and easy to get your arms around it, but the body is still fairly bulky and some players who are used to a solidbody guitar might not like that. The upper fret access on this guitar is fairly good due to the non-blocky neck joint.

Getting a good sound out of this guitar is pretty simple. It's wired with two Hofner 514 mini humbuckers and the same dual volume/dual tone control layout as a typical Gibson 335. It's a great instrument for jazz or blues players looking for a slightly different take on the classic double cutaway semi hollow guitar.

I've tried this guitar through a few different amplifiers as well as unplugged on its own. Before it was plugged in, I tested it acoustically to see what kind of tonal properties it had, especially as compared to the famed Gibson or Heritage models. It has a loud and resonant tone that almost sounds closer to the Gibson ES-330, a fully hollow version of the 335 that was manufactured with P90 pickups. It might be because the guitar contains a lot of maple wood which is quite bright in its tonality, but the guiar has an extremely resonant unplugged tone that has a good controlled low end, strong but netrural midrange, and a sparkling top end that works especially well for arpeggiated chords.

Plugged in the guitar has a really cool sound as provided by the Hofner humbuckers. The neck pickup has a wonderfully thick and throaty tone that lends itself quite well to complicated jazzy chord voicings and bebop esque lead lines too. The middle position (both pickups on) has a crisp and jangly tone that kind of reminds me of a Rickenbacker type guitar, and the bridge pickup has a perfect controlled snarl that is excellent for gritty blues or R&B stylings.

All in all I think the Hofner Verythin Classic is a wonderful alternative to a typical Gibson or other ES style guitar. Its got a look and feel of its own, and the tones available are definitely high class. At about $2,800 new these guitars aren't cheap, but you can pick them up for about $1,500 used if you look - definitely a killer deal for a more obscure yet still very well made and beautiful semi hollow body guitar.
Did you find this review helpful?yesno
Cookies help us improve performance, enhance user experience and deliver our services. By using our services, you agree to our use of cookies. Find out more.