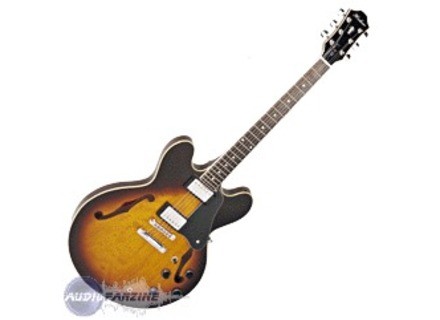 View other reviews for this product:
I bought it in the 90s in the US, a song (well still about $ 300, but compared to what I had planned to put in a hollow body is shit) and I discovered a great guitar made in Germany!

The handle was top notch, clean, I had a few years after refretter but nothing nasty. What bothered me the most, and that is why I avoided the play live is that the bridge was floating: a shot of a little unhappy wrist and it was over, you needed 15 minutes to redo the accuracy and agreement. But in the studio recording: a killer.

Sounds very hot jazz, country by colors. Mine had an old rotary vibrato which was a little space to master, but perfect for creating custom tremolo effect, a simple little flick of the finger on the rod. And it's very round, inimitable. I never found that sound, even on Gretsch or Gibson much more expensive (but probably newer)

I do not play on half-boxes, but I'd be happy to play again on it if I found one.
See the source
Did you find this review helpful?yesno
Cookies help us improve performance, enhance user experience and deliver our services. By using our services, you agree to our use of cookies. Find out more.