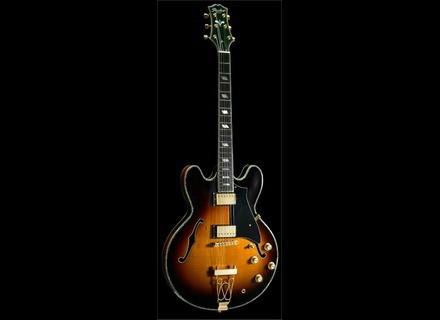 View other reviews for this product:
First of all I will say that I tend to agree with the previous opinion, there all is said and almost ..
But why always compare Gibson Peerless I realized that this is another world, an alternative;? Anyway with this type of model it is true that the large American firm of trouble to do ..

I brought a weekend in Belgium can be in France I would not have found in any case I've ever seen in the shop of Paris .. And I do not buy without try .. In any case when I tested it on a basic fender connected by the seller, I understood immediately and my face is illuminated .. This is a skyscraper in the Gold ... more factory adjustment of the action was very good, the guy had just received two so I decided very quickly see you ..

For me it is a guitar that suits me just, and suits my style, rock and rockabilly, I do not think the original pickups is so bad but hey there will always be better ...
For me the important thing is the construction of the machine, and then I'll tell you that in fact it is just "marvelous" ...

This guitar is a great tool for use professionnel.Elle was all my joy at the studio.

With one play everything is made for all, those who want to play jazz, pieces of beattles, of Lou Reed, ronny jordan, barry white, fusion ... but its not really a dirty filthy, it remains clear also .. she has too much chest to play acdc but it happens ..

Before I had a Epiphone Casino, 1982 Japan, and a gibson les paul studio US.Je think it's a mix of both .. The neck of a les paul, and the fully hollow body Epiphone. .

I got a great deal with a great recent model of 2011, I am filled.
See the source
Did you find this review helpful?yesno
Cookies help us improve performance, enhance user experience and deliver our services. By using our services, you agree to our use of cookies. Find out more.