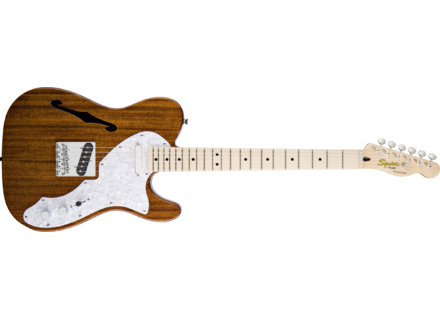 View other reviews for this product:
I'm not sure what the specifics on these CV Squiers are. Apparently they're China made or something. I've played a lot of Squiers in my day and wasn't impressed by any of them. But the price tag on these isn't exactly Squier-like. They're priced more in the Mexican Fender range which seems odd to me. I'm guessing this is Fender's idea of a high end overseas line, which in this day and age is actually a somewhat valid concept I think. Look at some of the Korean models that Ibanez and LTD have...impressive.

This is your basic thinline tele. Not bells or whistles. No surprises. It's no reissue but like the name says, the vintage vibe and feel are very much here in spades.

First thing I noticed in the store was the feel. This guitar to me felt better than most of the mexican fenders. I was in guitar center, which is notorious for having out of tune and abused guitars on the racks. It's common to have guitars with stolen parts and knobs just laying around. Sad actually. But the CV thinline I tried felt great. Stayed in tune reasonably. I was looking for a guitar to tour with. I have a lot of nice instruments that I can't take on tour so I usually find a couple of good beaters every tour and do what I will after it's over. I'm normally not a tele guy. But as soon as I played this one I turned into a fan. Neck was smooth and good feeling. Frets looked nice. Switches and knobs felt pretty solid. Overall it felt like a guitar that might cost $500 or $600.

The sounds are just as good. On tour I play mine through an Orange AD30 and a mesa traditional 4x12. I'm not an expert on how tele's are supposed to sound but this one sounds good. Really resonant especially on the neck pickup. This guitar has some of the best clean sounds I've heard. It's not a high gain beast but I didn't get it for that. It's not trebley like some can be. Very warm and full sounding.

I was really blown away by this one. The price seems pretty fair even though a lot of people will be shocked at the name on the headstock VS the tag. I promise it's every bit as nice as most Mexi Fenders. Maybe I got a good one but everyone I know who has one says the same praises as me so these must be something special. They hold up well too which is great. The only thing that might rival these for value is the slightly more expensive G&L Tribute series. I have a few of those and imo they are just a little bit better than these, although you have to find a deal on them to cover the price difference. For $300ish though, these CV's are about the best Fender style around.
Did you find this review helpful?yesno
Cookies help us improve performance, enhance user experience and deliver our services. By using our services, you agree to our use of cookies. Find out more.