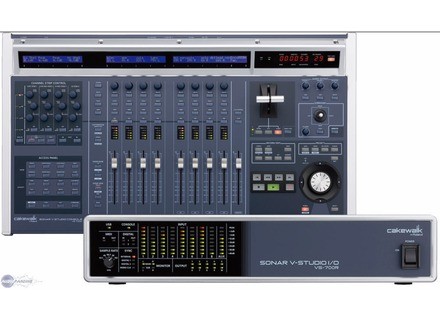 Roland pioneered the concept of combining hard disk recording with an ergonomic control surface. Now, a new generation of V-Studio builds on its legacy in new and innovative ways-combining Roland's renowned hardware expertise with the power and flexibility of Cakewalk's SONAR Producer DAW. SONAR V-Studio 700 addresses the gap between under-powered "budget" solutions and over-priced competitive solutions by offering a compelling, feature-rich music production system that is accessible to a broad range of users. And beyond that, the forward thinking design of SONAR V-Studio 700 addresses the needs of post production professionals by incorporating video and image hardware control functionality.

SONAR V-Studio 700 will be available February 2009 and will be able to be experienced at select music and sound retailers and purchased for around $4,000. Cakewalk will be offering existing SONAR 8 Producer customers a $200 rebate on SONAR V-Studio 700, details will be made available at www.sonarvstudio.com.

For more information on SONAR V-Studio 700 and to view demonstration videos and a dealer locator, please visit www.sonarvstudio.com.