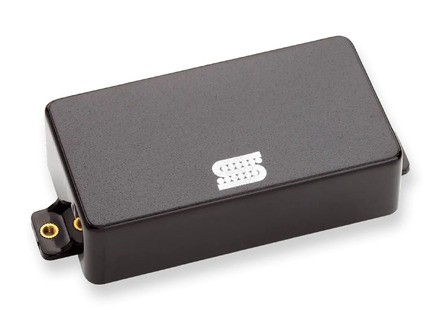 
2 user reviews
Find it in the classifieds starting at $75 Avg used price: $73

View other reviews for this product:
They Seymour Duncan AHB-3 Mick Thomson Blackout pickups are revisions of the original Blackouts that were meant to rival the infamous EMG pickups. Just like the EMGs, these feature the same style black cover, quick disconnects, use special pots and the such. They’re truly EMG clones.

Just like the original blackouts, the Mick Thomson signature models come in both neck and bridge varieties. This review covers both the neck and bridge models. First off is the bridge – The lows and mids seem to be much more even with the treble being extended when compared to the original Blackouts. They actually sound quite a bit closer to the original EMG 81 than the previous ones, and I find that to be a good thing. They’re tight, fat sounding and have a nice treble bite to keep everything nice and clear.

In the neck, they work very nicely. The treble helps keep everything more even and clear sounding without being a muddy mess like the original Blackouts were. The bass is just enough, the midrange seems to be even (just like the bridge), and the treble’s extended top end is a nice addition compared to the originals.

I’ve tried these in various woods, and they seem to work in nearly everything. Personally, I prefer these in mahogany, but they can work just as well in alder, basswood and probably even ash. Given that they’re active pickups, they’ll always remain quiet under even the most heavily lit stage.