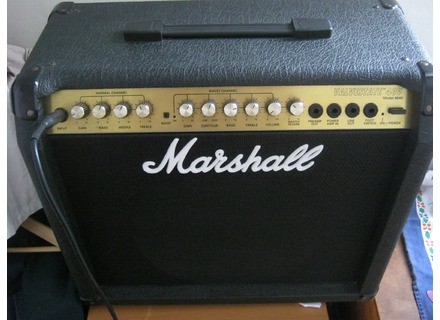 8040 ValveState 40V, Hybrid Combo Guitar Amp from Marshall in the ValveState I series.

Value For Money : Excellent
View other reviews for this product:
40W amp with tube preamp and solid-state power amp.

2 channels: clean and boost with EQ each (bass/mid/treb for clean and bass/treb for boost)

1 Contour control on the boost channel, and I don't really know which characteristics of the signal it actually affects (I'm no sound engineer, but it's something between EQ and compression), but it allows you to have a wider sound palette ranging from fat distortions to dryer sounds (think of a howling fuzz).

1 volume on the boost channel

It's very easy to use, since it doesn't have too many controls.
The only tricky part is the Contour control, since you have to fiddle with it to find out what it does (there's no word about it in the manual). But, hey, music is trial and error, isn't it?

The sound is perfect for me. I have a Leduc D2 (with a Seymour Duncan Invader) and I play mainly rock.

The clean channel is completely transparent and the EQ is very effective. I use it with only a bit of reverb (that of the amp) and even a light Chorus (taken from my Zoom MRS-8).
A negative point is that increasing the volume on the clean channel makes it crunch, so it's impossible to play clean at high volumes without a PA system, or to play with a crunch in an apartment...

The boost channel is very rich: You only need for the right combination between gain and contour, but it offers plenty of possibilities. I play almost all the time with the gain set to 6 and contour to 4. The sound I get is dirty enough and not very precise when paying rhythm guitar (I was looking for a way to come close to the deluging OD of Pixies and Placebo), while always having a fat tone for solos (the sound is powerful enough to toggle between rhythm and solo without the need of more gain).

The reverb is very warm. Surely due to it not being digital. But don't overuse it or it will drown your sound. I only use it with clean sounds because it doesn't fit my playing style with the boost channel.

I have used it since 1995 with only one accident: The connection between preamp and amp started giving some signs of struggle after several years, which resulted in a not very stable volume. But that's a known defect of the amp, you only need to connect a plug between the preamp output and the amp input and all is fine. Or you can always have it repaired, which is more expensive

What I like best: The very rich boost channel with "tube" sound, the sturdiness.
What I like least: The clean channel doesn't have enough controls (although you don't buy a Marshall for the clean sound).

With hindsight, I would buy it again, it's an excellent value for money and it''s easy to use.
Did you find this review helpful?yesno
Cookies help us improve performance, enhance user experience and deliver our services. By using our services, you agree to our use of cookies. Find out more.