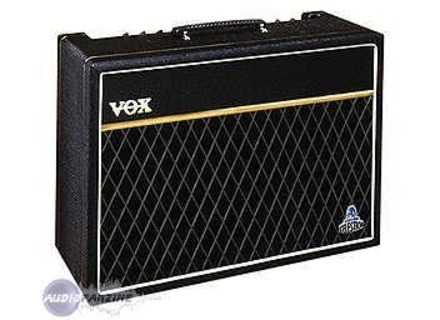 View other reviews for this product:
This is a transistor amp with a lamp in the prampli.
It dlivre 30 Watts.
A channel for clean sounds: volume, treble, bass. A channel for heavy distortion: gain, treble, bass, volume. In addition, two switches for an increase, gain, and the other, mdiums.
A pretty rverb springs, and a rapidly adjustable trmolo and intensity.
It is equipped with a HP 10-inch Celestion bulledog.
Headphones, HP ext. line and the back of the amp.

Operation is simple it can not, we get easily the sounds with this kind of research amp (ie clean sounds or crunchy or no saturated exs, the good old sounds of rock Stones Gallagher through Beck and Clapton.
The manual is a résumé slip three or four paragraphs résumé pretty well everything.

As I bought in order to play these songs, I must say that I did all I find the partner IDAL. All fawns, I think the effects on offer by the amps of the same brand (type AD30VT) trs quickly become boring or even better superflus.Il s'quiper good PDAL with rglages that go plutt than relying on these rglages prmachs.
I use a Fender Standard tlcaster (Mexico) and it's a pleasure to swing like the good old honky tonk rhythm, although the volume DGIG does not seem too violent, unlike what I've read in other opinions. This is probably one of the microphones just weaklings of this guitar well also enjoyable. Otherwise, I use an Ibanez nylon string so AEG10NE work of jazz standards and bossa, and the clean channel with a bit of reverb is rvle IDAL. Ah the beautiful sounds!

I've had some semaines.Je used to work for me or for RPTES quiet with friends. I bought nine 300. The seller to me about when I order a DSIR Pathfinder 15R. Apparently he had in stock for a long time. I must say that this amp derrire drags him a reputable slightly sulphurous, due to the malfunction of an optocoupler and bad SETTING THE potentiomtres contrlent that the gain is sent to the power amp. Well we'll see. For now, it gives me satisfaction Entire. Otherwise, I think the finishes are a little lgres, it may be of Asian manufacturing and the new trade policy that seeks to Korg's "general public". But overall, I like it well every respect and for the right price, I have my little Vox home!
See the source
Did you find this review helpful?yesno
Cookies help us improve performance, enhance user experience and deliver our services. By using our services, you agree to our use of cookies. Find out more.