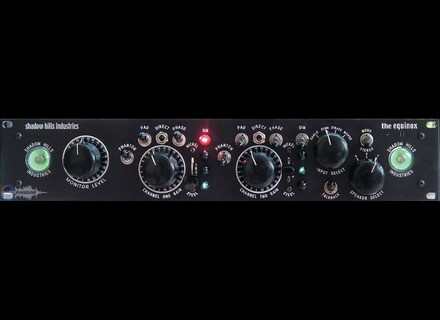 The Shadow Hills Industries Equinox is a really complete recording device for your front end. Not only does the Equinox have two grade A quality microphone preamplifiers, but it also serves as a control center for your studio, featuring monitor and talkback controls as well. This is an all analog piece of equipment and will take up two spaces in your rack system. For connections, the microphone preamps have their own XLR inputs and outputs, as do the connections for the built in summing bus for left and right channels. It then has 24 channels in D-Sub connections for hooking up to your DAW for summing, and then has another 8 channel hub for mono inputs and another for your speaker outputs. It also has an 1/8" talkback remote connection, although I did not use this. Lastly, it has it's own power supply that is sold separately.

It's not very difficult to use the Shadow Hills Industries Equinox. I've only used it on a handful of occasions since I've used it at an outside studio. The owner of the studio showed me the basics of the controls and I was good to go from there. Each of the two preamps has controls for gain, a pad, direct switching, and phase. It's also awesome that you can choose between three different transformer settings for slightly varying tones. These include settings for nickel, iron, and steel. There is also of course built in phantom power for your condenser microphones. As far as your monitoring section is concerned, it has a speaker select for A, B and C, a mono/stereo switch, a talkback switch, and a dimming switch. I absolutely love the feel of the Equinox overall, as the switches/levers are cool as are the super big controls for gain and overall monitor level, each moving a small tick at a time. It makes it easy to zero in and remember specific gain volume on your preamps. I haven't seen the manual for this and probably never will.

The preamps in the Shadow Hills Industries Equinox sound absolutely superb. They have a really warm sound that seems true at the same time. I've only used the preamps for recording vocals, but I've used them on a bunch of different singers and it did a nice job on everything. I haven't ran anything through the summing bus on this, but I'd be surprised if it didn't sound great and is nonetheless an incredible thing to have along with preamps. Not much more to say other than you can't go wrong with this soundwise...

While the Shadow Hills Industries Equinox is definitely aimed at professionals with a budget looking to get a top of the line piece of gear for their front end, to me it still seems like a great bargain considering all that you are getting here. The price is probably worth it for the two stellar preamps along - the fact that you get a 30 channel summing bus and monitor control makes it all that more sweet. This is a great choice for the home studio owner as well if you're looking to take your demo studio to the next level. With this, a good converter, good monitors, and a good mic, you'd have yourself a pretty good little set up!
Did you find this review helpful?yesno