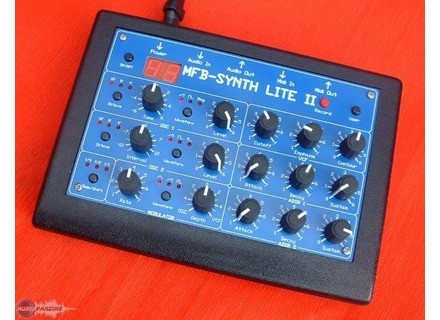 Value For Money : Excellent
View other reviews for this product:
Well, it is now 6 months qye and I think I have enough back to leave a review:

2 osc
1 sub
2 envelopes (ADSR with R = D or R = 0, which can be frustrating)
lfo asssignable choice of the cutoff, pitch or if the PWM osc 2 is type pwm
audio input
output
There&#39;s even a ring modulation
...
classic but still effective: one can not ask for much more (-1 for no independent release)

Ouch, but why they have not made their biggest box at MFB! it is fine to use the same box for several machines, but some buttons have more summers well come ... it requires the use of combinations and arrived Myself and my sounds of crushing several times (choose a sound is the same combination that record, with the difference that the button was pressed before it ... not great!)

Otherwise all the basic functions are accessible directly.
The Knobt are small and not accurate (notably the pitch, which is more easily attachable ...)

The sounds are very characteristic, very cold (the oscilloscope are trèèèèèèèèès froiiiiiids ....)
BUT IT&#39;S NOT NECESSARILY A FAULT! it gives it a very special color.
on the other hand missing damn potato: Envelopes are slow and the filter does not drop very low (I mean the right, of course ...).

The square, well, they are not real square ... I checked the tilt after a doubt, I realized that instead of oscillating between two levels, the wave drops by half at the end of each half period which demonstrates the lack of serious and we made a sound between the square and sawtooth ... (Found well to the ear) and found the same waveform for all the notes .... even for the sub-oscillator, strange ... this would be deliberate (because they are principal) in any case it is quite debilitating for the sub ...
this defect is not ratrapable by equalization, because it is found for all the notes.

the filter is still good enough. He returned to self-oscillation without being too aggressive. Associated with the lfo can make good "blips" that they are very good ... by the cons raisonnace loses its consistency in the descending into the grave

Frankly, I do not understand those who say it is good for bass synt ... I find it pretty bad at this level because the moles are too Enwrapping and tilt too much power (and then the sequencer is very lousy ...).
on the other hand I find it too bad for arpeggios like techno, metal (using the filter as possible, because this is his main quality) (controlled by an external sequencer of course).
I was very surprised as a lead sound stifling hot enough pain and (relatively) light with a slow LFO on the pitch filter and a closed 3 / 4.

+ Filter
+ Tilt typed
- Tilt typed (Agresion and rather thin)
- No envelopes and slow decay-independent release (suaf if we release something a zero ...)
- It blows
- Multiple combinations of certain parameters ...
- Transformer pollutes a lot (interference), plug in a lot of games in the synth and it makes noise.

You will perhaps find it hard I saw the price ... but it&#39;s still sold as a synth and should be treated as such. Moreover, even if it is given, prospective users are entitled to know the frustrations which they will have to do (even if justified given the price) ...

I do not know if I regret my purchase ... I wonder if this is still not better to put more money in a better machine.
But the price / quality ratio is very correct.

Update from 01/11/08:
The input filter does not work I opened to see, and then, surprise ... jack just was not welded! not bad finish .... This now well I did a little welding, it works, but the volume of the input is very low (whatever the source) and the synth not bad breath at the base, the signal to noise ratio makes the entry very difficult to use ...
The other day he made ​​me something bizarre ... It turns on and off every 5 seconds .... strange too.
Very disappointed by the quality and reliability.
Other details ... by opening m&#39;appercevoir I have only 2 resistors were added by hand welded 2 tracks: Having worked in electronics, we realize the quality of product development among the corrections have been made ​​post-development (2 for series large enough, it&#39;s very bad!).

The longer it goes the more I want to have believed that I could QQC to correct that price ... For the price you can not blame them ... So he takes the dust

Updated 19/11/09
The MIDI converter is becoming worse ... the bugs were already well represented in the beginning, but now it bugs more ... (Which seems to be a common problem ... MFB)
I do not do it again this purchase ... (But at the time the offer of very cheap new analog was really limited ...)
Let me tell you that I never would turn to a Krafzwerg, or a groovebox mfb ...
See the source
Did you find this review helpful?yesno
Cookies help us improve performance, enhance user experience and deliver our services. By using our services, you agree to our use of cookies. Find out more.