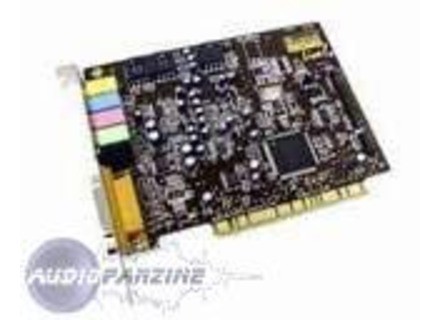 View other reviews for this product:
Above all is a Platinium 5.1 that so I, I / O are relatively accurate (too bad I can not run the extension rack Linux)
The bte running on a Athlon TBird 1000 / MSI KT266Pro / 1024 DDRAM / 200 GB HDD IDE
and I in gnral close to 64 MB of memory Soundfonts loads.
I use it especially as qu'expandeur / sampler with my Korg M1, the guitar plugs into reading between the line with a multi-effects / pramp the middle and the whole branch on the chain

Installation is no problem. on the other hand, some incompatibilities are prvoir in 2000 Pro: cubase supplied with the card does not work on W2000, only in 98 and XP ... In addition, I had the right of blockages Systmes constant in other versions of the OS, read the motherboard priori. Watch out VIA chipsets!!

The drivers are "almost" stable, only the editor happens to me soundfonts notches blue ....
I am constantly running Cubase (Cubase 1.13 for prcis and be more than enough for me) running without problem since I was in the beginners as computer music W3.1 with SB AWE 64.

I do not multitrack, but the machine comes to read a lot of tracks simultaneously without flinching (single disk speed is the real limit).

As for the effects, it is possible to apply the record, unlike what I read, you just know how to use software configuration effects

was 5 years old I use this card. I tried one before that the ISIS ISIS but the problem arises standards of drivers and management MIDI is not as enjoyable, though may be better documented ... .

gal budget, and under the same conditions, no doubt I would do the same choice, but I think the next will probably be more srieuse (RME ...) and the MIDI will be played in outer ...
See the source
Did you find this review helpful?yesno
Cookies help us improve performance, enhance user experience and deliver our services. By using our services, you agree to our use of cookies. Find out more.