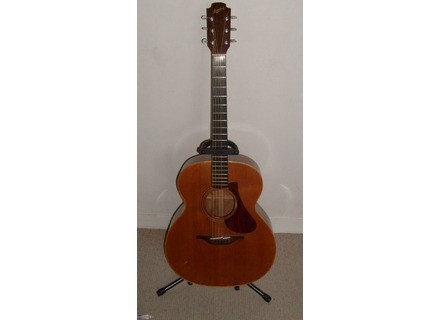 This is a Lowden G9 acoustic guitar. It's a Northern Irish company that makes its guitars by hand. I've only been able to play this recently, as somebody brought it in for a session, but I've played it enough to know that it's one of the best I've ever tried. This is not surprising, as the other Lowdens I've had the pleasure of playing are pretty spectacular too. It's acoustic-electric which is an added plus. It definitely sounds way better acoustic than it does amplified, but I can't complain about the sound in either setting. It has 20 frets though only 14 of them are before the body (and easily playable). It's made out of cedar, with a mahogany neck and an ebony fretboard. It has volume and tone controls,

This guitar is definitely one of the nicest-feeling guitar's I've played. That said, it's better for rhythm than for playing leads, as there aren't a whole lot of frets. If you're into strumming or cross-picking, though, it's really nice. Getting a good sound out of it is pretty easy, even if you aren't a great player! It has a phenomenally bright, chiming, ringing sound, especially when strummed. It's not the heaviest or biggest guitar around so it has a nice design.

This is up there with some of my favorite guitars for its sound. It just has a great, warm tone that still manages to be bright enough. haven't really found much I don't like to play with this guitar. When recording, it wouldn't be my go-to for playing fingerstyle, but it's got a fantastic sound for strumming, making it ideal for rock, country, folk (especially folk!), and other styles as well. I really like to play fast strummed folky stuff with this, or perhaps crosspicked chords like in the work of the Doobie Brothers. If you're just trying to gig or play at home, though, this is a great guitar for almost any genre and thus would suit someone who dabbles in multiple genres.

There isn't really a whole lot I don't like about this. Even though it's expensive, it's hand-made by the small crew of guys at Lowden, and has gone through their rigorous quality control. Thus the price is entirely justified, unlike some of the more expensive new items by giants such as Fender, Gibson, Martin, etc. Definitely a highly recommended instrument.
Did you find this review helpful?yesno
Cookies help us improve performance, enhance user experience and deliver our services. By using our services, you agree to our use of cookies. Find out more.