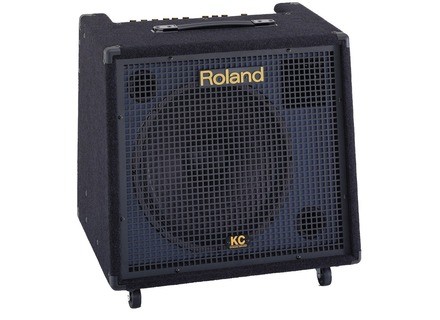 KC-550, Keyboard Amplifier from Roland in the KC series.

Product replaced by the Roland KC-600.

Value For Money : Excellent Audience: Anyone
Buy this productView price information >
View other reviews for this product:
It doesn't get any better (at least not yet). The sound generated is as clean as you could imagine a sound being; no distortion and hardly any EQ really even needed to be done (depending on what you're playing). I'm running my Roland Fantom X8 through the KC550 and you can't do any better than Roland matched with Roland.

've tried many different approaches to getting the keyboard to sound out as good as I wanted and expected it to. It started with two Hartke KM100 amps running stereo from the keyboard. Sounded great, in fact I posted a review on them. However, after having them for just a short time I began to get a feeling that the great sound would not last in the long run due to certain very small but noticeable distortions starting to form. I'd heard time and time again that Hartke wasn't the best, so I made the move and returned them.

I then tried running the keyboard through a PA system, using various speaker choices both powered and passive; needless to say it worked out (somewhat; more so for the passive, forget the actives - nothing but distortion) but the sound generated was nothing to brag about. I quickly returned the active speakers, and am now using the passives for vocal monitors.

I had never tried a KC550 before now, and my reasons were because of playing a KC350 that was probably not EQ'ed (didn't care to check), and found the sound to be horrible. To buy a full on PA system that I know would have worked, the amount of money to be dropped into that would be outrageous and too much for just needing a keyboard monitor.

I decided to play the KC550 and really mess around with it in the store; giving it a little more time than just a minute or two, made all the difference. I'm soon planning to buy a second KC550 to run stereo link, but even with just one its a beautiful sound. Granted, I've only owned mine for one day, so we'll see what the long run brings for this, but somehow I feel it'll all be just fine. Sounds like home.

I also picked the Roland KC550 as my top choice for headphone amp on my blog - &lt;a https://bestamps.net/top-headphone