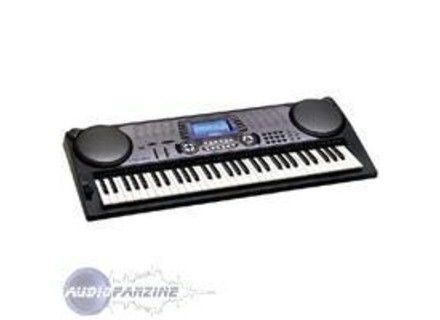 View other reviews for this product:
- What type of keyboard (piano synth ...)?
A synth ...
- What connections (audio, MIDI ...)?
Mainly I use the headphone / jack which I use for audio output rptition with my group.
It also possde Midi output to connect a sound card or interface ... I use an M-Audio Midisport 2x2 rolls and nickel.

- How many sounds and styles available? Are ditables?
We have the 127 GMID Sounds and other sounds made in a coup d'Casio possessions as things or Reverb.
The envelope is not paramtrable exactly as desired, but a system that possde preset.
A Pitch Wheel is available ..
We can paramettrer "banks" of his to get a faster one instrument .. . Without having to type the number corresponding to the desired instrument
Touch "plastoc" pure but that's what I love.

Gnrale configuration is far from being complicated ...
There is no edition of his tural:
one can simply combine two instruments, change the envelope everything ...
It can also be a split dplaable on the keyboard is good but rev limit.

I use it for a few prs three years but hey it has its limits easily reached in a short time.
What I like least I think it is the piano sounds are a rotten compltement my taste ... but at the same time the price it cost me I do not complain.
What I like most about this keyboard sounds that sound "Crystals" and "Pads" are really good my taste, the harp is not bad, organs are more or less good but still very s synthetic. Leads are rather good too although a Gneral rest of the South ... ^ ^
Report Qualit price: Okay I've seen better but still ok
I believe with the exprience qe I would go for something in the end even if it is more than enough for what I do for now.
See the source
Did you find this review helpful?yesno
Cookies help us improve performance, enhance user experience and deliver our services. By using our services, you agree to our use of cookies. Find out more.