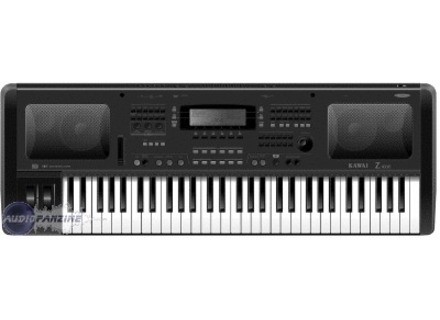 Keyboard 61 keys, scales well, trs enjoyable (not cacaille) with VLOC.
64 voice polyphony, GM compatible. Sound ditables in part.
2 audio outputs, blowing a little too I got, headphone jack on the front. MIDI usual trio.
MSDOS compatible floppy drive (thank you).
Contains over a hundred styles, ditables lgrement or deep, then store in memory 10 user. Good news: it reads and converts styles of Roland, Yamaha, Korg, Technics Wersi and GEM. Hello library available on the net!
Amplification incorporates VERY effective
It has an internal multi-effects fairly effective, and a system that sounds spatialization baptized SRS, which gives you the impression that the instruments out of the trunk of the synth to stroll around.
Squenceur 16 tracks. Midifiles bed directly on the floppy

Largely facilitated by a large LCD screen (240 X 64), with assignable switches disposs around this notch. Use is without Mystra, everything is simple, direct.
on the other hand, set to begin its own styles, it is better to first take a look in the manual (although Designed) to understand the possibilities of the BTE, as there has a srieuse layer. Each style known six variations, each with his break. Each of these variations is divided into six major and minor version, following the agreement jou (if you do not program the most part, it is also used in minor). Subdivisions for the same intro, and the final.

I use it for 4 years and I feel I still have not been around.
L o it's hard, is to replay a midifile. I compared a Roland JV SERIES, and a Gem Equinox, he made by far the best, with a EHJV, and warmth of sound that these two competitors are far from. In addition, with its amplification, which here must incorporate, and squenceur, it is by far the more independent and easier keyboard I could possder (and the list is fairly dja long ...)
See the source
Did you find this review helpful?yesno
Cookies help us improve performance, enhance user experience and deliver our services. By using our services, you agree to our use of cookies. Find out more.