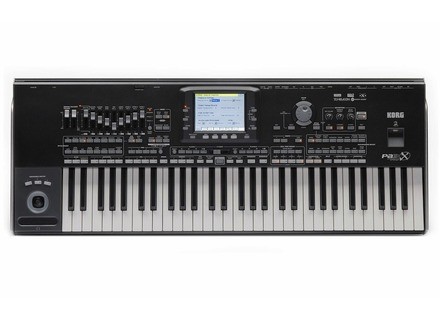 Pa3X 61, Keyboard Arranger from Korg in the Pa series.

View other reviews for this product:
The Korg Pa3X is a 61 key professional keyboard workstation and arranger that I used to complete many full songs/projects right on the keyboard without even having to work in my DAW. There is one thing that you can guarantee that you will get while working with the Korg Pa3X and that is a sound that you will never forget. The sound engine is great from the drums to the pianos, the Pa3X has it all.

This keyboard can be purchased in the 76 key version which I have not used, but the keys on the 61 key version are very good with velocity and after touch. The Pa3X 76 key version has a motorized tilted display screen that is one feature that the 61 key versions does not have. Both versions do have the well known chord sequencer function; this function allowed me to record my chord progressions quickly and on the go.

They keys are non weighted and that is a disadvantage of the 61 key version but it is pretty light and easy to gig with. It does allow sampling and has some really good effects built into it. I would prefer the 76 key version though because of the keys and the motorized display screen. The price difference between the 61 and the 76 version is not too bad and it is well worth the extra money to get those features. The 61 key version is built very well though with all of the sliders and buttons being made out of good materials. It has held up great for more over the time that I have used it for. I do not regret my decision at all.
Did you find this review helpful?yesno