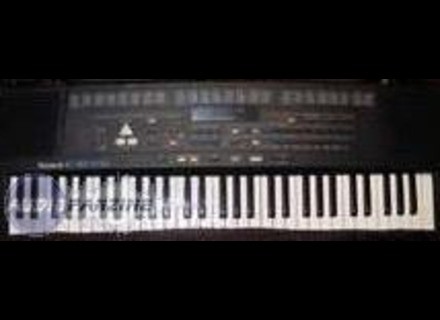 View other reviews for this product:
The E-16 was the low end of the SERIES E-1994. Its suprieurs were the E-36, E-56 and E-86 (the E-66 both came out somewhat APRS).
It's a home keyboard (known arranger) possdant 223 internal sounds and 32 styles with variations, fill in to change / original intro / ending, start sync. MODEL latest issue of E-15, E-16 has kept its sound by adding other touches to the "variation" to the slecteur cts of instruments amne traditional sounds of 128 223. It is the same for the E-36 and E-56.
Question connectivity, it has the MIDI In and Out, a support between pedals for the sound output Output L (Mono) R, and headphone output.
No edition of effects is available. It is the same for the E-36. Only from the E-56 that we start on this.
Question squenseur, there is none, and no floppy drive. A simple recorder as the E-15 there, the diffrence that this year was a right thing nonexistent backup APRS extinction with E-15. This is of a lithium internal E-16.
The basic synth trs and former ananmoins excellent sound just like the E-15, E-35, E-70, E-36, E-56, E-66, E-86, JW-50 . The sound is even better than the Roland D SERIES. Everything is quality cd and unavoidable.

Trs simple configuration as much on the instrument panel on the record, that's what we Reserved E-16. The manual is in French and other languages ​​course.

I did not. I jou above, I suprieur MODEL, MODEL the oldest, and the connate by heart. Its good appearance particularitsrsident in both friendly and professional quality sound. With its pregnant intgres it moves everywhere. 223 sounds, it's even still that currently offers progress with Roland EM-15 and EM-25.
The report qualitprix silent era of excellent knowledge was less than any other arranger keyboard sound as good as its this price range. This silent about 4,500 French francs TTC province.
However, the investment for a MIDI keyboard, a c'tait dception. Indeed, the E-16 does not possde a button on his Midi dashboard. Ms. on this site, you will find that people have complained how to use midi. He might be notified "multi-timbral," we can not control it on the dashboard. Therefore, I advise plutt the E-15 E-36 or any composer.
On another point, the E-16 possde a freelance, the same as that of E-15. They are both reported 64 styles. But there are only 32 half. This is to the fact that the following 32 are the same with an instrument and more, as the synths suprieurs was just ACCS with a button "Advanced Arranging." This is why the E-36 is intended, among other much better because of its many styles double card slot styles, absent from the E-16, sentenced to stay with 32 styles. Libra also has taken quite a blow from the E-15. Adjustable 3 tracks instead of 6. Your exact is that one can also drive less when you play it. No "Keyboard Mode" for split keyboard correctly, it goes without saying that even if the E-16 is excellent, it is rev limit.

I leave 6 / 10 ct trs for its friendly and again, his sound irrprochable. Roland has really done a great job this level!
See the source
Did you find this review helpful?yesno
Cookies help us improve performance, enhance user experience and deliver our services. By using our services, you agree to our use of cookies. Find out more.