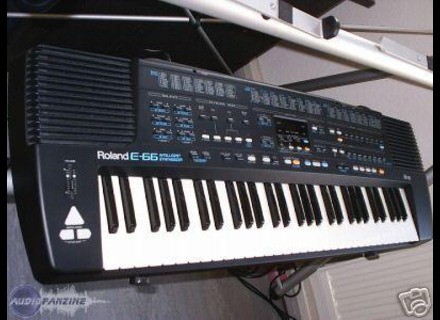 View other reviews for this product:
Arranger keyboard 1994, 5 octaves, with dynamics.
Midi In / Out, Through in connectivity, it also has the OUTPUT L (Mono) R, sustain pedal input, Headphone out, floppy drive. No sound can be edited.
241 sounds and 56 styles. Reverb and Chorus effects.
No séquenseur. Recording a track directly on disk.

The configuration is simple yes.
The manual is as clear as those of the E-series.

I did not. I have his full notice on the other hand. He was in line with:

He is the identical twin of E-36. On the latter, the builders had left the track for a floppy drive that it was like. This floppy drive has appeared on the E-66. on the other hand, they removed the card reader. For both, you have to go on E-68. In addition to the E-66, they removed a bank styles, those simplified.
No pitch wheel, not user programs, not séquenseur, no designer styles, no LED display. F sold 10,500 TTC at the time more expensive than E-56, they just did not care in the world. All because, as the floppy drive accepts the styles created by the E-86, the styles available on diskette, the SMF format. Not me, I would recommend the E-56 or E-68.

The preferred feature? Ah, well that's the magic I would say Roland! The quality of sounds, styles, excessive wealth at that level, and good setup by the "Keyboard Mode", the same as the available E-36.
See the source
Did you find this review helpful?yesno
Cookies help us improve performance, enhance user experience and deliver our services. By using our services, you agree to our use of cookies. Find out more.