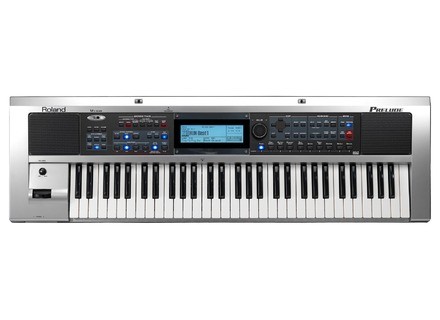 Consult the news section for the characteristics.

I brings my rating 1/10. I think for 899 we are entitled to get what Roland Prelude that have a minimum profit of last 25 years since the first released arranger keyboards.
And I do not speak specially of components that could be better. I do not mean that integrates Roland in 2010 on a machine of this price processor ncessite 5 minutes to power transfrer 25 midi files from a USB key.
I speak of the contribution effort operating system that controls the machine. When you pay too expensive, the manufacturer should he not make a srieuse bug fix before launching a machine on the market?
The buyer must ultimately remain with a machine that is not able to do what it says in its manual.
And even if the bugs corrected t what about ergonomics so rigid and poorly thought this sentence operating system worthy of programmers mid year 80?
Both components have a price being added every best out of the factory.
However, the code of a pilot system does ncessite him a unique production cost. To be bcl this point, you really do exprs.
See the source
Did you find this review helpful?yesno
Cookies help us improve performance, enhance user experience and deliver our services. By using our services, you agree to our use of cookies. Find out more.