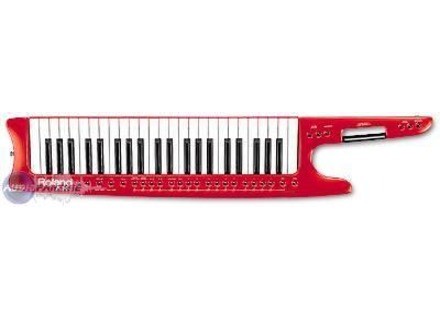 View other reviews for this product:
The Roland AX-1 is a MIDI controller in the form of a 'key-tar."  It spans about four and a half octaves and has a variety of setting controls that are programmable.  The keyboard has a variety of connections including a standard MIDI input and output as well as some 1/4 inch connections.  It keyboard also has a pitch bender on the handle which helps to give it the feel of a guitar.

Using the basic features of the Roland AX-1 isn't too difficult, but there are a lot of features that I do not know about since I don't actually own one of these.  The typical functions are easily located and after playing it for a bit I felt I had a good grasp for what it is about, but there are definitely a lot of options and features that I have yet to unlock.  I haven't seen a manual for the AX-1 so I can't say anything about it, but if you aren't an expert with MIDI controllers and want to take this in depth, then I would recommend trying to get your hands on a manual.

Since the Roland AX-1 doesn't actually have any sound patches of its own, the main thing that I look for in a MIDI controller like this would be its feel and its features, and I would say that the AX-1 excels in both of these categories.  It is an easy keyboard to play and has a great action, unlike many of the MIDI keyboards out there that are virtually unplayable.  While I've only used this keyboard a handful of times, if I were looking to pick up a MIDI keyboard in this type of form, the AX-1 would be the first place that I would look because of its high quality and reasonable price.  While I can't say this is a necessity for any keyboard player out there, there's nothing wrong with a little flare every once in a while...