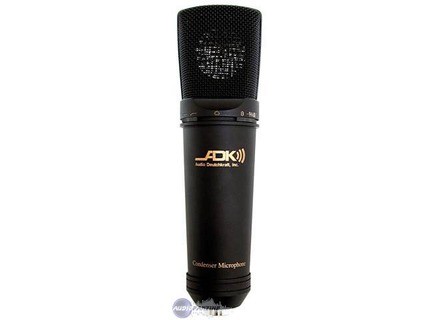 « Sounded great with an acoustic guitar »
4

View other reviews for this product:
The ADK A51 is a condenser microphone that is pressure gradient. It has a frequency range of 20 Hz to 20 kHz and a switchable low frequency cut off at 100 Hz. I have had several encounters with this microphone over the years and it has never given me a bad experience. I have used it with acoustic guitars, vocals and even some fretted instrumentals. I have seen heard it used with some reed or woodwind instruments too from other musicians.

The ADK A51 is built to last through some drops and accidental falls. It has a solid construction and a well made heavy duty mesh grill. The outside finish of the microphone is scratch resistant because of the finish that is on it so even if it is dropped it will not scratch.
The sound that I was able to get with this microphone was very good, especially with acoustic guitars because it projected the sound exactly as it sounded. It did not add any color to the sound; it was very clear and crisp. I like how it sounded with an acoustic guitar much better than the way it sounded with voice. It does not sound bad with voices depending on the natural tone and warmth of your voice. The A 51 sounded great on a female vocalist’s voice that was using it during a session at a small studio but when using it on my voice it just didn’t sound as crisp and clear so I ended up asking for a different microphone to use for my vocals. This mic is very affordable and can be used in multiple situations. I have used it about a total of 10 or more times and each time I use an acoustic guitar with it I am very satisfied. But I will no longer request this microphone to record my vocals with.