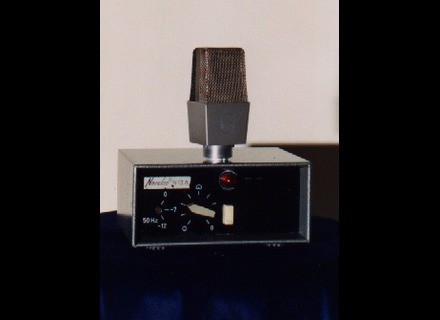 The AKG C12A is a unique condenser microphone that uses the capsule from a regular AKG C 12 microphone, but hooks up to a nuvistor impedance converter. A nuvistor is a kind of vacuum tube. The microphone portion of the C12A actually looks more like an AKG 414 than it does a C12, but sounds better. The mic is only for use in the recording studio as they're older and definitely a bit more fragile than your average microphone. I don't know all the details about how the C12A works as I've only had the chance to use it on one occasion.

The AKG C12A is definitely one of the most unique mics I've used in a while. It has the sound of a C12, which as you probably know is one of the best microphones ever made. It's not a dead match for the original C12 though, although I haven't had an opportunity to try them out side by side. I've used the C12A for recording some acoustic guitar parts in a large studio and it sounded incredible. Super clear and rich sounding. I think it's probably going to work well for most applications, at least when it comes to acoustic instruments, but to date this is the only thing I've used it for. The C12A is not nearly as ubiquitous as the C12 has been, and I can see why as it's kind of a strange microphone to set up and what not. It will still probably cost you a good chunk of change as it's still a type of C12 and sounds amazing. Plus since it's pretty rare that probably drives the price up a little bit, although I honestly do not know what these normally go for on the open used market. If you want a C12, I'd probably recommend going with a traditional one however unless you find one of these on the cheap.
Did you find this review helpful?yesno