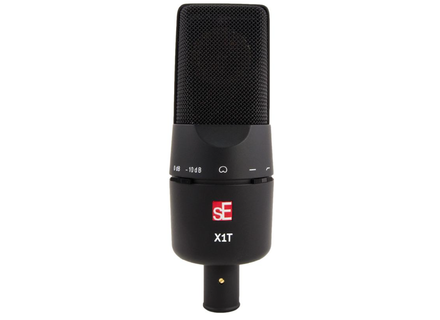 sE Electronics completes its sE X1 studio microphone series with tube and drums models as well as a Vocal pack.

The sE X1 D is the first X1 microphone designed specifically for instruments, and more particularly for drum kicks and percussions, as well as basses, piano hammers, etc. This large diaphragm condenser mic features a titanium-sputtered capsule, which allows, according to sE Electronics, faster transient and attack than gold-sputtered capsules, as well as a clear sound.

Second new product, the sE X1 T is a large diaphragm microphones described as the most affordable tube model made by sE Electronics. It is designed for vocals, acoustic instruments and percussions. sE Electronics equipped it with a gold-sputtered capsule and the mic features a cardioid polar pattern, a -10dB switch and a low-cut switch. It ships with a custom power supply, a 7-pin PSU cable and a mic clip.

Here is a presentation of the sE X1 Series at the sE Electronics booth at AES 2014: