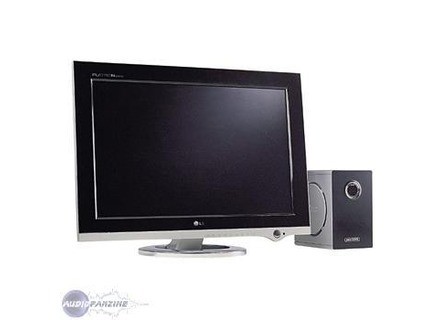 I use this screen for 6 months is in fact a whole notch multimedia station it Submitted the following features
-Its size, 23 inches or 58.4 cm Confre him lment a "comfort" empty
He benefitted from an anti-glare.
-The dot pitch is 0.258 mm.
With a multimedia station, capacity is trs importantes.Cette indisociable station is the screen, as it connects it, both for food and for the signal on a single cable (connector particular, DVI) Indeed, in addition to conventional rglages' screen, contrast, offers a permutation nettetetc inlays (not frquente function), and a sytme for organizing the step according DIFFERENT formats, so that the ratio of the image is close to 4 / 3 at the center while Exceeds 16 / 9 on the edges (according to film and tl between vision with D-sub, DVI-D, DVIH, video composite, S empty HDTV, DVD).
Submitted-station, which makes its originalitune his part, with support for HP Intgr comprising an amplifier (AMP), but also twice the output line of PC sound card.
-Finally, a tlcommande can grate the whole, sound, image,
In conclusion, this step (manufactured in 2004) is no longer in the catalog of the manufacturer, because the price trs (too?) Lev cela.On explains the origin is still in Germany, and nine Used, affordable prices can, furthermore, the associating an image processor and divider screen type "DualView" to make it a great tool in the field of sound and image . It is not my first stop, often 20 inches, but this is the first in 23 inches to the user management complte the image quality and price ratio son.Le that seems wrong for a step, is de facto trs advantageous Whereas the possibility to image, plus sound, which is at the moment, rare in a rapidly volution, technically, (plasma, laser financially, from year to year cheaper.
See the source
Did you find this review helpful?yesno
Cookies help us improve performance, enhance user experience and deliver our services. By using our services, you agree to our use of cookies. Find out more.