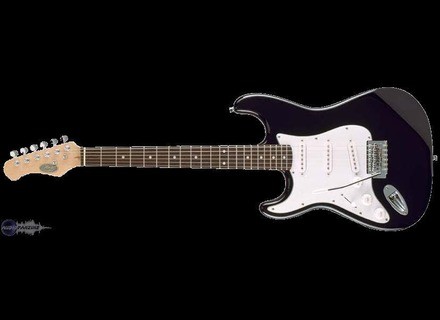 S300LH, Left-Handed Electric Guitar from Stagg in the Standard series.

View other reviews for this product:
Jme-in Germany if not mistaken, I bought 99 euros and nine left-handed version!
-Then it is an imitation strat so 21 frets 3 single pickups on the standard b stagg ... nothing special ...
It jen know anything!
-Adjustable: tone, tone, volume and choice typs 4 microphones
Erbale-handle but too large for my taste and tired hands! It's a shame

Not-I repeat myself but the handle is not super nice pa plus gliss fluid
Yes, relatively easy (at the same tps g large hands!)
Strat-ben imitation so nice, ergonomically speaking trankil it, good it is heavy but I had to mattendais pa bc rich or Otres ...
-To my surprise the nest's not so bad for an entry level guitar, the sound is no longer standardized but he!

I'm versatile and she follows me being given and its variation on the mikro:
-A jcm 900 amp AC sends the steak, I played on a mtal ur area and a collective of + the marshall footswitch and a big muff (korn. ...)
-Ben has to choose, but you ca c after which more Lampl ve forward behind the ptite scratches .. it does not follow too!
-I like the old rock sound that I create pe is super good but the sound fat at all on metal lamp! I do not like when the sound is dry ..... tp chakun his last taste!

-For 4 months because he had to put jme version left in electrik pr cheap! (U jsuis Jimi Hendrix! In reverse!)
-J 'aime bcp vibrato and design type strata; I do not like the weight and are nazes Settings button.
Report-more than satisfactory!
-Yes (c is that which change their minds!) I will make a pr bc rich by changing the pickups (always left-handed version)
See the source
Did you find this review helpful?yesno
Cookies help us improve performance, enhance user experience and deliver our services. By using our services, you agree to our use of cookies. Find out more.