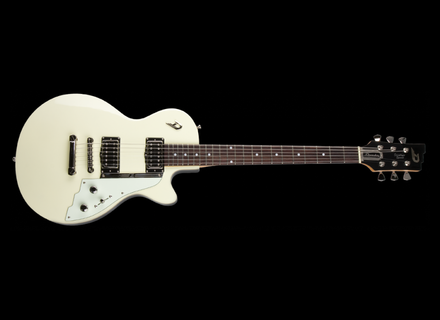 Starplayer Special, LP-Shaped Guitar from Duesenberg in the Starplayer series.

Value For Money : Excellent
View other reviews for this product:
Duesenberg is a German brand that its own spices (or sub-contracts, but in their own name): mcaniques, microwave, ...
This guitar is fitted with two humbuckers, a bridge + a tailpiece, a head "nortro" with mcaniques arranged 3 +3.
The Duesenberg Starplayer Special guitar is clearly inspired by the Les Paul, but far to be a copy. The body of the guitar is alder, the table and handle the saddle and rosewood fingerboard. The assembly quality is excellent, has felt the full srieux Germanic nose!

Cot electronics, only a volume and a tone with a bustling split by push-pull.
As microphones, there is a Duesenberg Crunchbucker in the bridge position and a '59 Duesenberg Grand Vintage in the neck position. Not surprisingly, the grain is LesPaulien trs.

The handle is trs enjoyable and I like: with a good slice of varnish, not prs to fouling or to tarnish with age. A bit more thick and more "U" that the handle of my Lag Roxanne all of the same.

I do not put him 10 for Aesthetics few small points:
- Too bad there is not a version with a binding on the handle for comfort even better, or default, a version "amliore" of this guitar.
- On my MODEL, I aprci a rosewood without the "white spots". Nothing alarming that said, the key does not default Submitted.
- Why hide under a table in the Saddle an opaque varnish?
That said, for 747 euro (without flight case), we will not rler. It was a guitar that I easily at a Gibson Les Paul Studio, and well above a Les Paul Special Faded!

Well, we're not going to lie, this guitar is not a featherweight, but the masses are relatively well imbalances. The handle does not catch, is taken well in hand and the radius that is not too large (so the key is not too flat) ... will not be a guitar Acrobat.
Access in 20.21 and frets 22mes ISSA is not the most, but not impossible either. Nothing worse than its "big sister" in Gibson.

Once connected, this guitar sounds regardless of the position select.
The Crunchbucker, a ... Crunch! It does not demand that send great big rock and talk to the lamps. Nanmoins, this microphone is sensitive enough for the attack. In a JCM800 2203 is carrment enjoyable!
The neck pickup, the Grand Vintage '59 is when even sweeter. It even lends itself to jazz, playing with the knob of Tone. The split s'avre particulirement also useful with the position intermdiaire, if you feel a little funky to me!

I tested this guitar on two amps: a Marshall JCM800 2203 and a Mesa Boogie Rect-O-Verb
In any case, the style of prdilection this guitar is rock at large ... but is versatile enough to go tease jazz, funk, blues, ...

I play mostly ska, punk rock, some funk and (...) I have rarely taken into default. Thanks to the split, there is always a combination o the guitar is doing relatively well.
The Marshall, keeping it on the Crunchbucker frankly and with a piece of the Dropkick Murphys in the ears, we believe it!
Mesa Boogie on the Crunchbucker Ragit also fairly well by pushing the gain. Prfre the same when the Grand Vintage '59 on Marshall, but the Mesa Boogie gnre normment also low. That said, a dgueule do not.
In his clear, even if it is not the favorite playground of dual microphones, a still acceptable. Jou have a lot of ska with.

I did not keep this guitar a long time since I prfrais the sleeves of Lag Roxanne. That said, it's a great guitar, given the price!
I bought mine at my luthier (Robert Patrick Forest sur Marque - 59) but I had an essay on Paris at the same time that Gibson SG Special Faded: ben is no comparison!
For the same price (about 750 euro), the bury the Duesenberg Gibson both the sound of the finish or even versatility. I'm not even a Les Paul so it faced the beautiful German.
In short, the report qualitprix is ​​excellent.

I think if I find one not in CHRE OCCAZ 'I let it ring.
If one day Duesenberg a good ide to leave with an enhanced version bindings, translucent finish of the table (like the back of the guitar) and even better quality of wood I bought without hsiter!
See the source
Did you find this review helpful?yesno
Cookies help us improve performance, enhance user experience and deliver our services. By using our services, you agree to our use of cookies. Find out more.