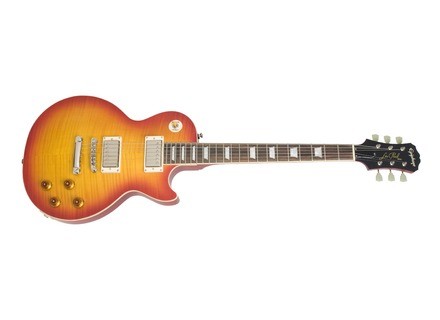 View other reviews for this product:
See below for specifications. Mine is Ice Tea Faded finish.

This guitar was published in 1959 copies. My certificate of authenticity identifies it as being the 1274th in the series.

Contrary to other opinions of this site, mine is in one piece, top with flamed veneer (verified by a luthier friend). Mahogany is of good quality and nice, and the table is really nice. The flame is clearly visible, and its reflections. Level "mouth" is a beautiful guitar.

The handle is nice for those who like beams, a Les Paul ... what

Ergonomics are good, balance sometimes leaves a bit to be desired, like all Les Paul, ditto for access to acute. However, the game technique is widely possible.

In short, it has the characteristics of a Les Paul.

The sound is very interesting. After several months of use, I'm always surprised when I took in my hands (I play mostly on my Fender Stratocaster). Plugged into a tube amp, it does wonders. Not connected, it is also excellent, very nice sustain and a very good precision in the sound. I play also connected as much disconnected.

The sound is incomparable with all the Les Paul Epiphone brand tried before. However, I have not tried the Tribute, which also looks very attractive on paper.

Perfect for playing blues, and to have fun with a big ACDC that task. Electronic equipment is really good.

This guitar cash out the effects.

Great complement for fans of the Stratocaster. Start with my Japanese 86 and this Les Paul, I have a very full sound palette.

Before buying, I tried all the existing models from Epiphone Les Paul, and the models first prize at Gibson Les Paul. I much preferred the former. I've played since its big sister in Gibson, and good ... An Epiphone is an Epiphone, a Gibson is a Gibson. However, the difference is not as blatant. It is especially felt on the dynamics of play I think it takes extensive comparison with the low-end Gibson who are far from good guitars.

But the sound is kif kif (but not equivalent course). It is widely thought to Epiphone Elitist series that has not existed for a while.

With experience I will ever be the choice but I'll still try the Tribute 60 just to see the difference. Anyway, it's a very good model Les Paul, the upscale home Epiphone. Do not be afraid of its manufacturing in China. Chinese bossent better and better, unlike Koreans who are worse and worse.

In short, good guitar limited edition!
See the source
Did you find this review helpful?yesno
Cookies help us improve performance, enhance user experience and deliver our services. By using our services, you agree to our use of cookies. Find out more.