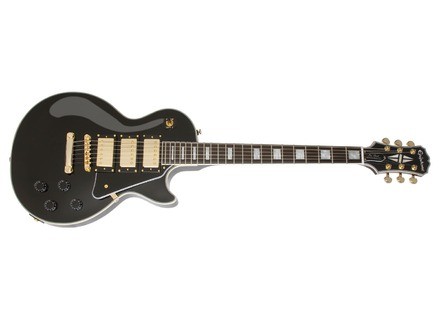 Buy this productView price information >
View other reviews for this product:
Epiphone Les Paul series black beauty/Ebony guitar is basically a cheap version of the Gibson custom custom shop three pick up Ebony guitar. This guitar is not built as well as a Gibson Les Paul guitar because of the inaccuracies in the weight and feel of the body. This guitar doesn't carry the same feel that the regulars Gibson Les Paul can feel. The tone can be very close and very similar but there's that extra missing link that makes a Gibson what it is today.


If you've ever spent any time with you get some Les Paul guitar then you know that they are warm, very beefy, and thick sounding. This guitar is going to give you that same type of beefy warm thick tone. However when you're playing it just seems to be something missing in its feel, weight, and balance. The Gibson Les Paul has an extra 10% which I think maybe constitutes the large price but it certainly does give the player that feel of workmanship and solid built instruments. This guitar does not give you that sense of workmanship and feel.


These guitars are fairly inexpensive if you can find them in the used or even the new classifieds . You can find a new one for right around $750. The Epiphone guitars are pretty popular because they're basically a lesser version of a Gibson guitar. So they're fairly popular and they're somewhat inexpensive compared to a Gibson Les Paul guitar.
Did you find this review helpful?yesno